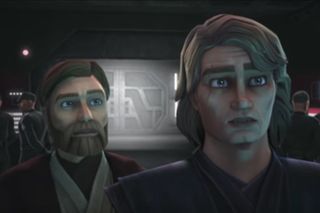 The animated series Star Wars: The Clone Wars is being revived for a surprise seventh season on the upcoming Disney streaming service. The series will pick up the storylines from 2013's sixth season, following Anakin Skywalker, Obi-Wan Kenobi, Ahsoka Tano, and Captain Rex in the lead-up to Star Wars: Revenge of the Sith.

Here is the first trailer:

The season will run for 12 episodes and be overseen by the supervising producer of the original, Dave Filoni.

"I honestly didn't think we would ever have the opportunity to return to The Clone Wars," says Filoni. "Thanks to the relentless fan support and the team behind Disney's direct-to-consumer streaming service, we will now get to tell more of those stories. We feel a tremendous responsibility to make something that lives up to the legacy that George Lucas created with the original series and I think our team, many of whom worked on the show from the beginning, has risen to the challenge."

Lucasfilm has not specified when the new Star Wars: The Clone Wars season will debut.