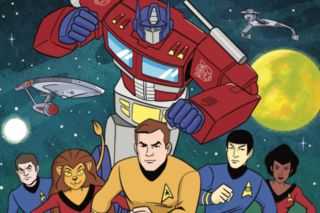 Star Trek and the Transformers are crossing over in a new limited series from IDW Publishing, but with a twist. According to io9, the four-issue Star Trek vs. Transformers pits two of IDW's biggest licenses and two of pop culture's most iconic properties — in their cartoon forms — against one another in a crossover co-writer Mike Johnson calls "several decades in the making."

The series will be written and drawn in the spirit of the 1970's Star Trek: The Animated Seriesand the 1980's original Transformers series.

"John [Barber, co-writer/IDW Editor-in-Chief] and I are having a blast writing the first meeting of Starfleet and Cybertronians, and [Philip Murphy] is the perfect artist to bring these two franchises together on the page," said Johnson.