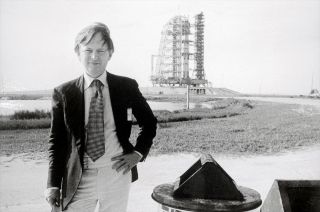 Tom Wolfe, author of the 1979 book "The Right Stuff," seen in 1972 at Kennedy Space Center in Florida. The Apollo 17 Saturn V rocket is visible on the launch pad behind him.
(Image: © Bettmann/Corbis)

Tom Wolfe, whose 1979 book "The Right Stuff" chronicled the high-flying adventures of the first U.S. astronauts, has died at the age of 88.

A celebrated journalist and best-selling author, Wolfe had been hospitalized for an infection when he died on Monday (May 14), according to the New York Times, citing his long-time literary agent.

"I'm saddened to hear of the passing of legendary author Tom Wolfe," wrote Jim Bridenstine, NASA's administrator, on Twitter Tuesday. "'The Right Stuff' was an inspiration to me and millions of others. He will be missed."

Wolfe, whose other titles include the essay collection "The Kandy-Kolored Tangerine-Flake Streamline Baby" and the 1987 satirical novel "The Bonfire of the Vanities," gave rise to "New Journalism," a style of non-fiction that placed truth before fact and embraced a subjective perspective.

Wolfe's particular flair of using colorful prose and eccentric punctuation helped him in capturing the sweeping scope of his chosen subject — such as the early days of the Space Race between the United States and former Soviet Union, as he did in "The Right Stuff."

"This book grew out of some ordinary curiosity. What is it, I wondered, that makes a man willing to sit up on top of an enormous Roman candle such as a Redstone, Atlas, Titan or Saturn rocket, and wait for someone to light the fuse?" he wrote in his foreword for the 1983 edition of "The Right Stuff."

Wolfe first went about answering that question in a four-part series written for Rolling Stone magazine in 1973. He originally intended "The Right Stuff" to cover the full length of the Space Race through to the end of the Apollo moon landings, but after writing about the Mercury astronauts, he felt that he had achieved his purpose.

"I have enjoyed corresponding with many pilots, and with many widows of pilots," he said. "Not all have written to pat me on the back, but almost all seemed grateful someone had tried — and it had to be an outsider — to put into words certain matters that the very code of the pilot rules off limit in conversation."

"These...matters...add up to one of the most extraordinary and most secret dramas of the twentieth century," he said.

For the most part, the Mercury 7 astronauts felt that Wolfe had represented their stories well.

"Wolfe's book was accurate in many respects," said John Glenn, who in 2016 became of the last of NASA's original Mercury 7 astronauts to die.

Glenn and the other astronauts were quick, though, to draw a distinction between what Wolfe had written and how the book was adapted for the silver screen. Wolfe, himself, did not approve of some of the creative liberties director Philip Kaufman took for the 1983 film.

"I do not think the movie accurately reflected the book, or the people involved in the Mercury program, including me," Glenn said in 1996. "Certainly there was not the kind of in-fighting or envy that was portrayed in the movie."

Among the readers that Wolfe reached with his book (and the movie it inspired) were future NASA astronauts who on Tuesday took to Twitter to share their appreciation.

"Reading that book and seeing the movie based on the book re-kindled my dream of becoming an astronaut," said Mike Massimino, who twice launched on the space shuttle to service the Hubble Space Telescope. "Thank you Tom for the inspiration that changed my life."

"Reading 'The Right Stuff' as a kid inspired me to become an astronaut," said Terry Virts, who logged nearly 200 days on the International Space Station.

Scott Kelly, who at 340 days holds the U.S. record for the single longest mission, similarly credited Wolfe for inspiring him to join the NASA corps.

"He changed my life, and I am grateful I was able to thank him for the wildly unrealistic dream he gave me as an 18 year old boy," Kelly said.

While aboard the space station in 2016, Kelly wrote a letter to Wolfe, describing "The Right Stuff" as "the spark that set me on the course that has led me here."

Copies of "The Right Stuff" in print and eBook formats are part of the library available to the crew living on the orbiting outpost.

Winner of the National Book Award for Nonfiction in 1980, Wolfe's "The Right Stuff" continues to be read and adapted for new audiences. An audiobook narrated by actor Dennis Quaid (who portrayed astronaut Gordo Cooper in the film) was released by Audible in February and as of a year ago, National Geographic was developing a dramatic television series based on the book.