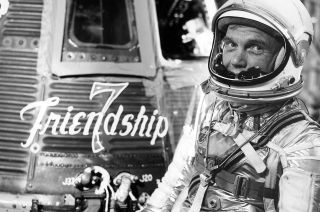 The former astronaut and U.S. senator was being hospitalized at the Wexner Medical Center at Ohio State University in Columbus when he died. In 2014, Glenn suffered a minor stroke, affecting his vision, after undergoing heart-valve replacement surgery.

The last of NASA's original seven astronauts to die, Glenn circled the world three times on board the Mercury capsule "Friendship 7" before splashing down in the Atlantic Ocean on Feb. 20, 1962.

"Zero-g and I feel fine," Glenn reported to the ground five minutes into the flight. "Oh, that view is tremendous."

Thirty-six years later, at the age of 77, he returned to orbit aboard the space shuttle Discovery, becoming the oldest person, worldwide, to fly into space.

A colonel in the U.S. Marine Corps who flew combat flights during World War II and the Korean War, Glenn served for 25 years as a U.S. senator representing his home state of Ohio. He was honored with the Congressional Gold Medal and the Presidential Medal of Freedom, the highest civilian honors awarded by the United States.

Glenn was named an astronaut in April 1959,  two years after he set a transcontinental speed record flying a jet from California to New York in three hours and 23 minutes. On his historic flight in 1962, Glenn made three revolutions of the Earth on board the Mercury-Atlas 6 orbital mission in just four hours and 55 minutes.

"During my [three-orbit] flight, I was able to perform basic research experiments, which helped contribute to what we know about humans in space," Glenn told me in November 1996. "The primary scientific objective of my [Mercury flight] was to determine the reaction of the body's senses to weightlessness."

The historic mission, which came after orbital missions by two Russian cosmonauts and sub-orbital launches by two of Glenn's fellow Mercury astronauts, also established the United States as a contender for the first time in the space race with the Soviet Union. [In Photos: John Glenn, First American in Orbit]

"There was a strong feeling in this country that we needed to surpass the Soviet's advances and regain our position at the top," Glenn told me. "It is hard to imagine the strength of those convictions today — especially with the collapse of the Soviet Union — but you can bet they were a strong motivator for America."

The successful flight made Glenn an instant hero. Deemed too valuable to the country to risk flying on another rocket, Glenn served as an advisor to NASA until 1964.

"Since I was not going to be on active flight status, I stayed on with NASA for a couple of years to plow my experience back into the program and then went on to other pursuits," Glenn said.

He retired from the Marine Corps the following year to run for the Senate.

Winning his third campaign in 1974, Glenn served for four terms, becoming chief author of the 1978 Nonproliferation Act, chairing the Government Affairs Committee from 1978 until 1995, and sitting on the Foreign Relations and Armed Services committees and the Special Committee on Aging.

In 1984, he ran and lost in the Democratic primary to be a candidate for the President of the United States.

On Feb. 20, 1997, 35 years to the day after he first orbited the Earth, Glenn announced that he would retire from the Senate. Eleven months later, NASA confirmed his return to space to study how microgravity affects aging.

"I'm proud to have been part of the beginning of America's space program, and needless to say I'm excited to be back and I am honored and privileged," said Glenn at a Jan. 16, 1998 press conference announcing his second flight. "The important thing is the opportunity that this gives to take us in some new directions with research. I think that is really what we are kicking off."

For almost nine days, from Oct. 29 through Nov. 7, 1998, Glenn and his six STS-95 crew mates on board Discovery completed 134 orbits, conducting 80 medical and material research experiments, and deploying and retrieving a free-flying science platform.

On his touch down, Glenn had logged a total of nine days, two hours and 39 minutes off the planet on his two history-making spaceflights.

"I took a little lapel pin that I had on my first flight — took it up again on [the space shuttle] flight — and that has been one of my prized possessions because it has been on both flights along with me," Glenn told me in 1998.

John Herschel Glenn, Jr., was born in Cambridge, Ohio on July 18, 1921. He attended Muskingum College and began flying lessons, earning his pilot's license in 1941. Glenn left college before earning his degree (though he was awarded a Bachelor of Science in engineering from Muskingum in 1962) and enlisted in the Naval Aviation Cadet Program. He was commissioned in the Marine Corps in 1943.

The NASA John H. Glenn Research Center at Lewis Field in Cleveland, Ohio was renamed in his honor in 1999. Two Ohio roadways bear his name, as do at least eight grade schools located across the country.

In 2014, the U.S. Navy christened the USNS John Glenn, a mobile landing platform, for his service as an aviator and astronaut. In 2006, Ohio State University founded the John Glenn College of Public Affairs. In May 2016, the country's second international airport was renamed for John Glenn in Columbus, Ohio.

In 1999, Glenn collaborated with Nick Taylor to author his biography, "John Glenn: A Memoir" (Bantam Books). He was portrayed in the 1983 feature film "The Right Stuff" by actor Ed Harris, in the 2016 ABC limited event series "The Astronaut Wives Club" by Sam Reid, and in the upcoming Fox feature film "Hidden Figures" by Glen Powell.

In March 2001, Glenn took a turn playing himself, making a cameo appearance on the NBC TV sitcom "Frasier."

In 1943, Glenn married the former Annie Margaret Castor of New Concord, Ohio. Together they had a son, Dave and daughter, Lyn and two grandchildren.

[Editor's Note: This article has been corrected to state that the Friendship 7 capsule splashed down into the Atlantic Ocean, not the Pacific.]