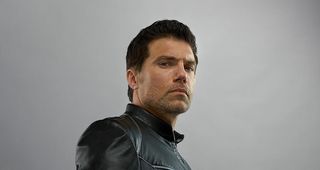 "Inhumans" actor Anson Mount has joined the cast of "Star Trek: Discovery" season 2. Mount will take the role of Christopher Pike, the original Captain of the USS Enterprise (NCC-1701).

Mount confirmed his casting on Twitter with a promotional image.

The Enterprise appeared in the finale of Discovery's first season, though Pike himself was not seen. Executive Producers Gretchen J. Berg and Aaron Harberts later confirmed to TV Line that the Enterprise would appear in Discovery season 2, also hinting at Pike's involvement.

Mount's casting him the fourth actor to play Pike, who appeared as Captain of the Enterprise in the pilot of the original Star Trek series. Pike has previously been played by Jeffrey Hunter and Sean Kenney in the original series, and by Bruce Greenwood in Paramount's current film franchine.

"Star Trek: Discovery's" season 2 will air on CBS All Access, the network's proprietary streaming service. No premiere date has been set.