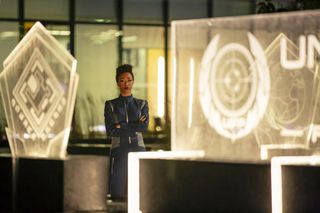 It's been a complicated season, hasn't it? Alternate universes and killed-off characters made the "Star Trek: Discovery" timeline in the show's first season appear more like an episode of "Lost." So it's really disappointing that the season finale had so little momentum to it, instead focusing on relationships and peace rather than moving the plot along.

My theory is that the showrunners wrapped up most loose ends out of fear that "Discovery" would run for only a single season. (We now know that the show will return for Season 2, but that probably wasn't known during production.) Unfortunately, this means the show ran out of steam long before the end of the episode.

First, let's recap the situation at the episode's start. The xenophobic alternate-universe Emperor Georgiou (Michelle Yeoh) is in charge of the USS Discovery. The Klingons are winning the war against Starfleet, and senior members of its Federation are desperate to get rid of them at any cost. Georgiou's presence is classified, and she is supposed to be standing in for her deceased real-universe counterpart, but she doesn't really try. [15 of the Most Bizarre Alien Species Featured in 'Star Trek']

"Klingons are animals, and they have no home world," she announces on the Discovery bridge, suggesting the crewmembers refer to it by either its name — Qo'noS — or "the enemy planet." After a few more un-Starfleet comments from Georgiou, including allusions to eating Kelpians like crewmember (and former acting captain) Saru, Michael Burnham (Sonequa Martin-Green) starts challenging Georgiou's past in front of the crew. This prompts Georgiou (privately) to threaten to lock Burnham in the brig if she threatens to reveal her true identity again.

Eventually, the Discovery crewmembers hide their starship inside a Klingon cave on Qo'noS to start mapping the surface with drones for a future attack. A landing party of Georgiou, Burnham, Cadet Sylvia Tilly (Mary Wiseman) and former security officer Ash Tyler (Shazad Latif) beam to a seedy town to try to get intelligence on access points through dormant volcanoes.

In between scenes involving drugs and sex that do little for character development, the crew figures out where to send in the drone. But before long, we discover the "drone" carried by Georgiou is actually a "hydro bomb" that will render the planet uninhabitable and kill most of the Klingons after it blows up in the volcano system.

The rest of the episode turns into a lengthy morality play that focuses on Burnham's dark past with Klingons; as she reminds us, the Klingons killed her parents when she was a kid. But in periodic voice-overs, she explains that her previous drive to kill the Klingons was wrong and that now she sees them differently.

As she confesses her story to Tyler (her ex-boyfriend who temporarily shared a skull with the Klingon Voq), he reminds her that now that Voq is gone, he can see both the human and Klingon sides — but he stands with her, "where it's possible to feel compassion and sympathy for your enemy." But when Tyler says no Klingon felt that way toward Burnham, she reminds him, "You did."

Burnham and the Discovery's Klingon prisoner L'Rell (Mary Chieffo) confront Georgiou just as Georgiou is about to detonate the bomb. After Burnham threatens Georgiou with being hunted into perpetuity if Georgiou pulls the trigger, Georgiou is allowed to wander free. (I can't help but wonder if she's going to be behind some rebel faction that goes against Starfleet in a future season, so let's hope Burnham has good sense.) Burnham gives L'Rell the detonator so she can unite the Klingons.

Tyler decides to go with L'Rell when she leaves, saying that he has no real place in Starfleet. L'Rell then convinces the Klingons to reunify their 24 houses and stop the war. It's too bad, because it would have been interesting to hear more about whether Tyler's operation was related to the Klingon augment virus that came from a failed attempt to use human DNA to enhance Klingon genetics, which was explored in "Star Trek: Enterprise" (more about this at the fan site Memory Alpha.) Then again, Tyler is so mopey these days that practically every scene gets dragged down by his presence. If we see him again, let's hope he and Burnham have moved on from their volatile relationship.

Then, Burnham and her crew (including, by proxy, the deceased Hugh Culber, killed by Voq/Tyler a few episodes ago) receive accolades from Starfleet before heading on to their next destination, the planet Vulcan. On the way, however, they get a distress call from none other than the USS Enterprise, which is helmed by Capt. Pike, the predecessor of the more famous Capt. James T. Kirk. The season ends with the two starships meeting face-to-face.