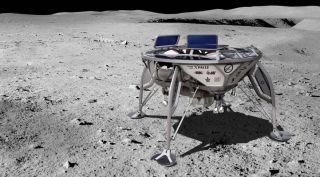 It's official: The $30 million Google Lunar X Prize is no more.

"After close consultation with our five finalist Google Lunar X Prize teams over the past several months, we have concluded that no team will make a launch attempt to reach the moon by the March 31, 2018, deadline," X Prize founder and chairman Peter Diamandis said in a joint statement today (Jan. 23) with Marcus Shingles, the organization's CEO.

"This literal 'moonshot' is hard, and while we did expect a winner by now, due to the difficulties of fundraising, technical and regulatory challenges, the grand prize of the $30M Google Lunar X Prize will go unclaimed," they added. [Google Lunar X Prize: The Private Moon Race Teams (Images)]

The Google Lunar X Prize (GLXP) was announced in 2007, with the stated aim of encouraging commercial spaceflight and exploration. The contest challenged privately funded teams to put a robotic spacecraft on the moon, move the craft 1,640 feet (500 meters), and have it beam high-definition photos and video back to Earth.

The first team to do this would win the $20 million grand prize. The second-place team would get $5 million, and an additional $5 million was available for various special accomplishments, bringing the total purse to $30 million. The GLXP has awarded more than $6 million so far, for various milestones that teams have achieved. (Milestone prizes would count toward, and not boost, the total purse taken home by first- or second-place teams. So, the money given out by the GLXP would not have topped $30 million.)

The deadline was originally the end of 2012, but GLXP representatives pushed it back several times, finally to March 31 of this year. Google apparently did not want to grant another extension — but that doesn't necessarily mean the moon race is completely off.

"X Prize is exploring a number of ways to proceed from here," Diamandis and Shingles said in today's statement. "This may include finding a new title sponsor to provide a prize purse following in the footsteps of Google's generosity, or continuing the Lunar X Prize as a noncash competition where we will follow and promote the teams and help celebrate their achievements."

Several dozen teams threw their hats into the ring over the course of the decade-long GLXP competition, but that pool was finally whittled down to five finalists: Florida-based Moon Express, Japan's Team Hakuto, SpaceIL from Israel, India's Team Indus and international outfit Synergy Moon.

Several of these teams have stressed that the GLXP, while a helpful spur, was not the main reason for their existence.

"SpaceIL is committed to landing the first Israeli spacecraft on the moon, regardless of the terms or status of the Lunar X Prize," SpaceIL spokesman Ryan Greiss told Space.com via email. "We are at the height of our efforts to raise the funds for this project and to prepare for launch."

And Moon Express CEO Bob Richards wrote the following words earlier this month, as part of an op-ed for Space News: "The competition was a sweetener in the landscape of our business case, but it's never been the business case itself. We continue to focus on our core business plans of collapsing the cost of access to the moon, our partnership with NASA, and our long-term vision of unlocking lunar resources for the benefit of life on Earth and our future in space."

Team Hakuto may yet have a lunar legacy as well: The company is run by the Tokyo-based startup iSpace, which also plans to exploit lunar resources. iSpace recently raised $90 million in investment funding to help it achieve this goal.

"We are inspired by the progress of the Google Lunar X Prize teams and will continue to support their journey, one way or another, and will be there to help shine the spotlight on them when they achieve that momentous goal," Diamandis and Shingles said in today's statement.