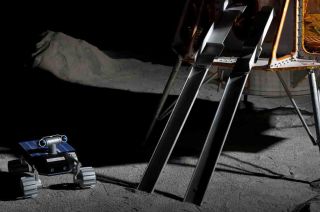 And then there were five.

The remaining teams are Florida-based Moon Express, Israel's SpaceIL, India's Team Indus, Hakuto of Japan and the international outfit Synergy Moon. Eleven other teams had been in the running, but they failed to lock up a verified launch deal by the deadline of Dec. 31, 2016. [Google Lunar X Prize: The Private Moon Race Teams (Images)]

"It's a diverse group with different approaches, and the fact that it's five — we couldn't be happier," GLXP senior director Chanda Gonzales-Mowrer told Space.com.

The GLXP offers $20 million to the first private team that lands a spacecraft on the moon, moves it 1,640 feet (500 meters) and has the vehicle beam high-resolution photos and videos back to Earth. A successful mission must lift off by Dec. 31, 2017, for the team to claim this prize.

The second team to accomplish all of this by the deadline will receive $5 million. An additional $5 million is available for various special accomplishments (such as detecting water ice on the moon), bringing the total purse up to $30 million, contest organizers have said.

Moon Express signed a deal to use Rocket Lab USA's Electron booster, and SpaceIL will fly aboard a SpaceX Falcon 9 rocket. Synergy Moon will ride atop a Neptune 8 rocket from Interorbital Systems, while Team Indus will use the Indian Space Research Organisation’s Polar Satellite Launch Vehicle, and will carry Hakuto's rover with it as part of a rideshare agreement, GLXP representatives said.

Also today, GLXP organizers announced that the 16 teams that had remained in the competition until this latest cull will split the $1 million Diversity Prize. This award, which is part of the overall $30 million purse, was set aside to reward teams for encouraging diversity in the fields of science, technology, engineering and math (STEM).

"With all of these different approaches and different people, there was no way that we could pick just one team that was deserving of it," Gonzales-Mowrer said. "So we came up with the idea of, 'We think everyone is deserving of it, so we probably should award it to everyone.'"

The GLXP kicked off in 2007, with the stated aims of helping to jump-start a new space economy and inspiring people around the world to engage more fully in STEM fields. A total of 29 teams threw their hats into the ring at some point over the course of the competition's decade-long existence, Gonzales-Mowrer said.