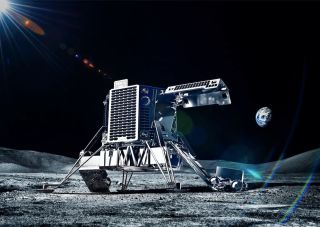 Artist's illustration of the Japanese company ispace's lander and rover on the surface of the moon.
(Image: © ispace)

That's a Japanese record for "Series A" funding — the round of financing that comes after the initial "seed capital" — and the most Series A money ever raised across the global commercial space sector, according to ispace representatives.

"With this funding, ispace will begin the development of a lunar lander to establish a flexible and regular lunar transportation system, and lead the exploration and development of the lunar surface through micro-robotic systems," company founder and CEO Takeshi Hakamada said in a statement. [Moon Base Visions: How to Build a Lunar Colony (Images)]

The company also aims to mount two moon missions in the next three years. The first, targeted for late 2019, will launch the ispace lander to lunar orbit, where it will study the moon's surface. The second, in late 2020, involves putting the lander onto the lunar surface and deploying multiple rovers, company representatives said.

This lander will be capable of carrying 66 lbs. (30 kilograms) of payload, including the rovers — which themselves can each accommodate about 11 lbs. (5 kg), according to ispace representatives.

Such activities are part of ispace's effort to provide regular and affordable transportation services to the moon, which in turn could help humanity exploit lunar resources and establish a permanent settlement on Earth's nearest neighbor. Indeed, by 2040, ispace predicts that 1,000 people will be living on the moon, and 10,000 folks will be visiting every year.

"With the network and knowledge of our new shareholders, we will not only expand commercial space activities centered around lunar resources, but also create a sustainable living sphere beyond Earth," Hakamada said.

ispace also manages Team Hakuto, one of five finalists still competing in the Google Lunar X Prize (GLXP). The first privately funded team to put a spacecraft on the moon, move it 1,640 feet (500 meters) and beam high-definition photos and videos back to Earth will claim the $20 million GLXP grand prize — as long as that team launches by the deadline of March 31, 2018.

Team Hakuto has signed up to launch its 9-lb. (4 kg) rover atop an Indian Polar Satellite Launch Vehicle rocket, along with the landing craft of another GLXP finalist, Team Indus. No firm date has been set for this liftoff, however.

ispace is not the only company that wants to help humanity get a foothold on the moon. For example, fellow GLXP finalist Moon Express also aims to provide a cost-effective transportation system for paying customers, to the lunar surface and beyond.

Editor's note: This story was updated on Dec. 13 with the correct planned launch date of ispace's lunar-orbit mission. It's targeted for late 2019, not early 2019.