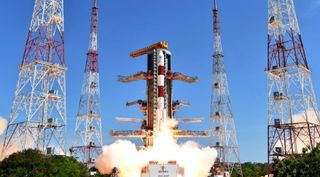 WASHINGTON — TeamIndus, an Indian team competing in the Google Lunar X Prize, announced Dec. 1 it has a launch contract for its lunar lander mission with the Indian Space Research Organisation (ISRO).

The contract, which has been verified by the X Prize Foundation, is for the dedicated launch of TeamIndus' lander and rover on a Polar Satellite Launch Vehicle (PSLV) planned for December 2017.

As currently planned, the PSLV will place the TeamIndus spacecraft into an elliptical transfer orbit around the Earth of 880 by 70,000 kilometers. The spacecraft will then slowly spiral out to the moon on a 21-day transit before landing in the Mare Imbrium region of the moon, the same general region where China's first lunar lander, Chang'e-3, landed in 2013. [The Google Lunar X Prize: The Teams in Pictures]

The Google Lunar X Prize offers a $20 million grand prize to the first private team to land a spacecraft on the moon, travel at least 500 meters, and return high definition video and other data. The prize's deadline has been delayed several times since its introduction in 2007, with the latest deadline being the end of 2017.

TeamIndus will be cutting it very close, with a launch scheduled for late December of 2017. In a Dec. 1 interview, Sheelika Ravishankar, an executive with TeamIndus, said she expected that the X Prize Foundation might extend the prize deadline by a few weeks if there was a team that launched by the end of 2017 but had not yet landed, but did not expect a longer and more general extension. "There is no reason to extend the contest any more," she said, citing the contracts several other teams have announced for 2017 launches.

TeamIndus also has an accelerated schedule for assembly of its lander and rover. The company expects to complete work on a qualification model of the spacecraft in a couple months, with work on flight hardware to start shortly thereafter. The spacecraft is scheduled to be completed in September for final testing and integration with its launch vehicle.

The use of a dedicated launch vehicle, rather than flying as a secondary payload on another customer's launch, gives TeamIndus the capability to accommodate other team's rovers, Ravishankar said. "We're in the final stages of inking a deal with one of the teams," she said.

Such a partnership among competing teams is not unprecedented: another team, Astrobotic, plans to carry rovers for at least two other teams, although Astrobotic has not yet announced a launch contract for its mission.

Ravishankar said the total cost of the mission, including launch, is about $65 million, which TeamIndus is raising through the sale of company equity, sponsorships, and a planned crowdfunding campaign set to begin in January.