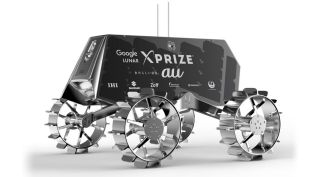 Team Hakuto of Japan is developing a rover that it will fly to the moon on a lander built by another Google Lunar X Prize competitor, TeamIndus.
(Image: © Team Hakuto)

WASHINGTON — Team Hakuto, a Japanese group competing for the Google Lunar X Prize, announced Dec. 20 it has a verified contract to fly its rover on another team's lander in 2017 after its initial partner dropped out of the competition.

Team Hakuto said that it has an agreement with TeamIndus to fly its rover to the moon on the Indian team's lander, and that the agreement has been verified by the X Prize Foundation. Financial terms of the agreement were not disclosed.

Teams in the Google Lunar X Prize, a competition to land a privately-developed spacecraft on the moon, travel at least 500 meters, and return video and other data, have until the end of the year to obtain a launch contract and have it verified by the X Prize Foundation. Teams that fail to do will not be allowed to continue in the competition. Teams that do remain in the competition have until the end of 2017 to launch their spacecraft. [Team Hakuto: Japan's Private Moon Rover Project in Pictures]

TeamIndus announced Dec. 1 that it had a contract with the Indian Space Research Organisation to purchase a Polar Satellite Launch Vehicle slated for launch in December 2017, and that the contract had been validated by the foundation. At the time of the announcement of their launch contract, TeamIndus said they were in the "final stages" of competing a deal to fly another team's rover on their mission.

"We're proud to verify Hakuto's launch agreement and are pleased to see two Google Lunar X Prize teams collaborating on this mission to the moon," Chanda Gonzales-Mowrer, senior director of the competition at the X Prize Foundation, said in a statement. "The purpose of this prize was, in part, to foster collaboration in the private sector and this is a great demonstration of teams coming together in the next giant leap in space exploration."

Team Hakuto has previously planned to fly to the moon with another team, Astrobotic, under an agreement announced in February 2015. However, Astrobotic has announced that it will be dropping out of the competition while continuing to develop its lunar lander for a planned 2019 commercial mission.

In a commentary published in the Dec. 19 issue of SpaceNews Magazine, Astrobotic Chief Executive John Thornton said the company felt it unwise to try and rush development of its spacecraft for a 2017 launch and threaten the company's overall development.

"We do not make this decision lightly. However, when the demands of the X Prize competition are in conflict with the demands of our customers, we must stay true to our customer-first principles," Thornton wrote, adding that "we believe it is more important to wholly focus on performing for our customers than chasing unrealistic prize deadlines."

Astrobotic tweeted Dec. 20 that its agreement with Team Hakuto remains in place, allowing the Japanese group to fly a separate rover on Astrobotic's 2019 mission in addition to the one launching with TeamIndus in late 2017.

Team Hakuto is a project of ispace Inc., a Japanese company with long-term plans to develop what it calls a "high-frequency transportation service" to the moon and extract resources there. The company announced a memorandum of understanding (MOU) Dec. 16 with the Japan Aerospace Exploration Agency to jointly work on plans for lunar resource development, addressing technical, economic and policy issues.

"Space resource development is attracting a great deal of attention around the world," said Takeshi Hakamada, the founder and chief executive of ispace, in a Dec. 16 statement announcing the MOU. "We think it is important to actively participate in the rule-making and commercialization while we are technologically competitive globally with our Hakuto project."

Team Hakuto is the fifth of the 15 remaining Google Lunar X Prize teams to have a verified launch contract, allowing them to remain in the competition. SpaceIL and Moon Express announced verified launch contracts in 2015, followed by Synergy Moon in August and TeamIndus Dec. 1. PT Scientists announced Nov. 29 that it had a launch contract with Spaceflight Industries, who would broker a rideshare opportunity for them, but that agreement had not yet been verified by the X Prize Foundation. One of the remaining teams, Angelicvm of Chile, had planned to fly its rover on Astrobotic's lander.