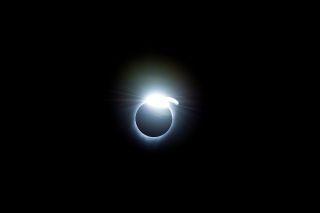 The “diamond-ring effect” is seen during the total solar eclipse of Aug. 21, 2017. This photo was taken from a NASA Gulfstream III aircraft flying 25,000 feet (7,620 meters) over the Oregon coast.
(Image: © Carla Thomas/NASA)

This article was originally published at The Conversation. The publication contributed the article to Space.coms Expert Voices: Op-Ed & Insights.

The total solar eclipse that captivated the United States this week was more than just a celestial spectacle (and a reminder to take care of your eyes). It was also a valuable lesson in how to manage electricity grids when a crucial generation source – solar power, in this case – goes temporarily offline.

The last total solar eclipse to pass over the US was in 1979, a year when President Jimmy Carter was in the midst of the energy crisis and struggling with ballooning oil prices. In response, he made a concerted shift to greater energy independence through alternative energy sources such as solar.

In 2017, almost the whole world is grappling with the transformation of the electricity industry and the move to renewable energy.

Read more: Scientist at work: why this meteorologist is eager for an eclipse.

Eclipses have – and always will have – a lot to teach us. While this eclipse did not cause major disruption to the US electricity network, it gave system operators a better understanding of how future intermittencies can be managed.

Despite the rapid decline and rebound in solar power output during the event, operators were able to manage without a hitch. Their thankless task reminds us of the importance of having resilient and robust electricity systems with sufficient backup capacity.

Solar plants lost around half of their ability to generate electricity during the two and a half hours of the eclipse, dipping and rising almost three times faster than the average rate at which power stations can ramp their output up and down. The shortfall was covered largely by gas-fired power plants, and extra hydro capacity.

Given the recent scrutiny on Australia's beleaguered electricity grid, it makes sense to ask how our power system would fare if faced with the same challenge. Take a walk through almost any suburb and you'll see dozens of solar panels glinting from roofs. How much have they destabilised our grid? Would we pass the eclipse test?

System managers and market operators such as the Australian Energy Market Operator already intricately balance demand and supply levels throughout the day, and must deal with unexpected outages at power stations, extreme weather events (think of South Australia), and increasingly predict how the share of intermittent generation from renewable resources will be matched and secured.

According to the Clean Energy Council, Australian renewables provided 17 percent of the country's electricity generation in 2016. In world terms that looks rather unimpressive. But this figure does not reflect the growing impact of behind-the-meter solar PV that is slowly but surely reducing reliance on grid electricity during the day.

As outlined in a previous FactCheck, Australia has the highest proportion of households with PV systems on their roof of any country in the world, at over 15 percent. (However our total energy produced from solar is somewhat less than Germany, Italy, Belgium and Japan, which have a propensity for larger systems).

Of course, all this distributed solar adds to the complexity for utilities and grid operators, and underpins why we have technical rules and connection standards to ensure that households connecting individual systems to the grid do not cause unintended consequences for local network areas. As the forecasts for rooftop solar installations continue to be revised upwards, AEMO nevertheless remains sanguine about the potential for grid disruption:

Utilities themselves are acutely aware of the "non-negotiable social contract of keeping the lights on," as mused by Frank Tudor, chief executive of Western Australia's regional utility Horizon Power, in an opinion piece written before the eclipse. The emboldened South Australian government may take further comfort in the fact that its newly minted 150-megawatt Aurora Solar Energy Project would come into its own during such weather interruptions (more often due to clouds than eclipses), with its capacity to store solar power in molten salt storage tanks, to be dispatched as required during peak periods.

The eclipse also underlines how crucial the innovations in technology and data analytics will be in ensuring that electricity grids can still operate seamlessly as the share of renewable energy grows.

We are seeing this already in many small, isolated power networks across the country, where microgrids, particularly in coastal tourist towns with a proclivity for clean technology, are already pushing the limits of hosting capacity and driving utilities to explore big data solutions to assist with the integration of increased levels of solar PV.

One such example is the sky camera trial being conducted in Carnarvon, Western Australia, that will track weather patterns and anticipate cloud cover to help with grid stability. The trial is using machine learning to help predict the impact of weather on the grid, and to balance the fluctuations with other energy sources, thus helping the network to withstand such events without losing reliability.

Read more: Five things the east coast can learn from WA about energy.

With our energy systems becoming ever more distributed and decentralised, the US eclipse provides another of nature's lessons on the need to be smart about creating resilient networks.

The next total solar eclipse for Australia will be in 2028, and will pass straight over Sydney. In the meantime, a hybrid eclipse will cross Australia's northwest in April 2023.

Time will tell how much of an impact these events will have on our power grids. But given the importance of electricity for our health, wealth, transport and so much more, let's hope our system operators and policy makers aren't blindsided.