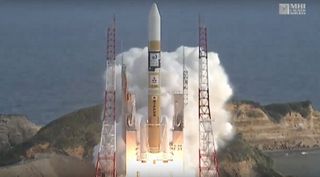 Mitsubishi Heavy Industries (MHI) and the Japan Aerospace Exploration Agency conducted the launch on behalf of  the Japan Meteorological Agency. Mitsubishi Electric Corp. built the satellite, which will serve as an on-orbit backup for the Himawari-8 satellite currently in operation.

Wednesday's launch comes on the heels of rocketmaker MHI declaring its intent to expand commercial use of the H-2A, a 15-year-old rocket the company aims to replace around 2020 with a next-generation launcher it's calling H3. [Japan's Spaceport: The Tanegashima Space Center in Photos]

In an annual report released Oct. 25, MHI said it "intends to market more proactively its H-2A satellite launch services both in Japan and abroad."

"We will promote H-2A rocket launch services to countries new to space exploration, and accelerate activities to attract orders for H-2A and H3 launch services from leading global satellite operators," the company wrote.

The H-2A debuted in 2001 and put up a dozen Japanese satellites before a 2003 failure sidelined the vehicle for 15 months. Since its 2005 return to flight, the H-2A has launched successfully 25 times, orbiting dozens of satellites for Japan and a small handful for the United States, South Korea, Australia and Canada.

The larger H-2B rocket has been used five times to launch Japan's HTV cargo tug to the International Space Station. A sixth HTV launch is planned for December.

Using the H-2A and H-2B rockets, MHI generally performs four to five launches per year, mainly for the Japanese government.

Last year was slower, according to the report, with only three launches compared to the five it conducted in 2014. However, 2015 did include an H-2A launch of the high-throughput Telstar 12 Vantage satellite for Telesat of Canada, marking the first time a commercial telecommunications satellite operator used the launcher. The success of this launch, which featured an upgraded upper stage for geosynchronous missions, apparently whet the company's appetite for a larger piece of the commercial market despite its current limitations in executing such missions.

MHI officials have said commercial interest in Japanese launches exceeds what the company is currently capable of providing due to production limits — something the Tokyo-based company plans to change with the H3 rocket in 2020. Until the next-generation launcher is online, MHI has room for only one commercial launch a year. Whereas H-2A/B quantities are mostly tied to government demand, the H3 will have a production rate of six to eight per year — possibly climbing up to 10 if demand allows — providing room for several commercial missions on the vehicle’s annual manifest.

As of now, MHI has no private commercial missions on its launch manifests. However, the H-2A has been tapped to launch the United Arab Emirates' KhalifaSat remote-sensing satellite  in 2018 and the Emirates Mars Mission Hope spacecraft in 2020.