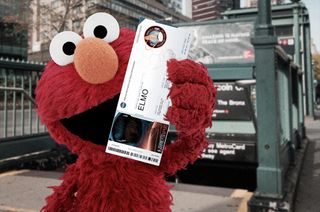 Elmo, Cookie Monster and the other popular muppets from "Sesame Street" have joined forces with NASA to count down to the launch of the first Orion spacecraft, scheduled for Dec. 4.

Beginning Tuesday (Nov. 25) and over the next ten days, NASA and "Sesame Street" will share online comic strips, videos and graphics of the Muppet characters interacting with the Orion space capsule in an effort to educate a new generation of space explorers about the Orion Exploration Flight Test-1 (EFT-1) and NASA's future journey to Mars.

"9 days to go before NASA's Orion launch!" wrote Sesame Street on Twitter on Tuesday, captioning a cartoon of The Count counting heat shield tiles. "Did you know that there are 970 tiles to protect its shell from high temps?" [How Orion's First Test Flight Will Work (Infographic)]

The muppet-led Orion countdown is part of a collaboration between NASA and the Sesame Workshop, the nonprofit behind the television show. The partnership began with the muppets' names being registered with NASA's "Journey to Mars" boarding passes outreach program and signing an Orion "I'm on Board" banner.

During the countdown, the muppets will share what items they would pack on a journey to Mars, describe what their flight would be like as an Orion crewmember, and will use their ABCs to better understand the spacecraft. At the end of the count, scheduled for Dec. 4 at 7:05 a.m. EST (1205 GMT), Elmo will join NASA at the Kennedy Space Center in Florida for the EFT-1 launch.

The uncrewed (and un-muppeted) test flight will send the Orion 15 times farther out into space than the International Space Station on a four-and-a-half-hour mission to test the systems critical for crewed flights into deep space. After circling the planet twice, the Orion spacecraft will re-enter Earth's atmosphere at 20,000 miles per hour (32,200 kph) before descending under parachutes to splash down in the Pacific Ocean.

When Sesame Street premiered on TV on Nov. 10, 1969, NASA's Apollo 12 mission was four days from launching the second of six crews to land on the moon. The EFT-1 mission will mark the first spaceflight of a NASA capsule since the end of the Apollo program and the farthest that a spacecraft designed for a crew has travelled out since.

Following a timeline proposed by President Obama, NASA is working towards launching Orion to Mars by the 2030s. Today's preschoolers — the target audience for "Sesame Street" — may be among those who make that journey as members of "the Mars generation."

The muppet countdown is the latest collaboration between Sesame Street and NASA, Previously, NASA astronauts have appeared on the show, even filming segments while in space, and characters on Sesame Street have explored other topics related to human spaceflight.

The Orion launch will be second time Elmo has attended a NASA liftoff; the little red muppet was present at Kennedy Space Center for the final space shuttle mission in 2011.

Click through to collectSPACE.com to watch a video of Sesame Street’s Elmo answering if he would like to fly on Orion.