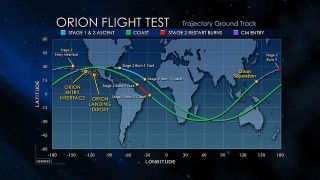 This map was tweeted from the account of the Intl. Space Station, featuring a map showing the trajectory ground track of the Orion flight test, postponed until Dec. 5, 2014.
(Image: © Intl. Space Station (via Twitter as @Space_Station))

The Orion spacecraft — built for NASA by Lockheed Martin — is designed to take humans deeper into space than ever before. Officials hope that future versions of the spacecraft will transport astronauts to deep space destinations like Mars or an asteroid towed into orbit around the moon. Scroll down for more stories, video and photos from the launch:

Splashdown! NASA's Orion Spaceship Survives Epic Test Flight as New Era Begins
America has a new spaceship as NASA's Orion spacecraft passed its first unmanned test flight on Friday, Dec. 5. See how the mission unfolded from its launch in Florida to a smooth splashdown in the Pacific Ocean.

Splashdown! Orion Lands In Pacific Ocean
Orion, NASA's first space capsule since Apollo, splashes down in the Pacific Ocean after a smooth test flight on Dec. 5, 2014.

Blast-Off! Orion Capsule Launches Aboard Delta IV Rocket
See launch video of NASA's Orion spacecraft as it blasts off atop a Delta 4 Heavy rocket on the Exploration Flight Test 1 mission.

NASA to Make 2nd Attempt to Launch Orion Space Capsule: Watch It Live
It's Round 2 for NASA's Orion spacecraft as the space agency attempts to launch its first new space capsule in more than 40 years. Here's how to follow it online.

The launch debut of NASA's first deep-space capsule in more than 40 years will have to wait at least another day after a series of delays thwarted repeated liftoff attempts on Thursday (Dec. 4).

NASA Admin. Takes Hard Questions from Space.com
Do Orion and SLS only exist to provide jobs on Earth? Is Orion a capability without a real mission? Could Orion fly atop a SpaceX booster?NASA Chief Maj. Gen. Charlie Bolden handles these and others with Space.com’s @DavidSkyBrody.

Final Countdown! NASA's Orion Spacecraft by the Numbers
The countdown has begun for the first test flight of NASA's Orion spacecraft. Here's our own by-the-numbers countdown for Orion.

Drones and Planes Will Live-Track NASA's Orion Capsule Launch
NASA and the U.S. Navy plan to launch at least five other aircraft along with the Orion space capsule to monitor and record data from Thursday's mission.

NASA's Orion Inspires the Hulk, Star Trek's Uhura and Elmo on YouTube (Videos)
When you think of NASA, you don't usually think Hollywood, but several actors — and even Muppets —have pledged their support for the Orion spacecraft test flight.

How NASA's Landmark Orion Spacecraft Test Flight Will Work
NASA's Dec. 4 test of its Orion space capsule comes with many risks and rewards. Here's how the daring test should work.

Orion Capsule Will Sport 'Glass Cockpit' To Minimize Weight | Video
The 'dashboard' or user interface of NASA's next-generation capsule will have a digital display. The capsule will also have about 60 physical switches.

NASA's 1st Deep-Space Capsule in 40 Years Ready for Launch Debut
A spaceship built to carry humans is about to venture into deep space for the first time in more than four decades.

NASA to Launch First Orion Spaceship Test Flight This Week
Learn how to watch many of the events leading up to the first test flight of NASA's Orion space capsule live online all week.

NASA Clears Orion Spacecraft for 1st Test Flight Next Week
Officials have given the Orion space capsule a "go" for its unmanned test flight expected to launch next Thursday (Dec. 4).