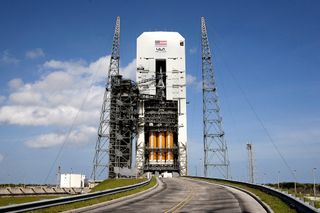 A spaceship built to carry humans is about to venture into deep space for the first time in more than four decades.

NASA's Orion space capsule is scheduled to blast off on its first test flight Thursday (Dec. 4). The unmanned mission, called Exploration Flight Test-1 (EFT-1), will send Orion zooming about 3,600 miles (5,800 kilometers) from Earth, before rocketing back to the planet at high speeds to test out the capsule's heat shield, avionics and a variety of other systems.

No human-spaceflight vehicle has traveled so far since 1972, when the last of NASA's Apollo moon missions came back to Earth. Indeed, in all that time, no craft designed to carry crews has made it beyond low-Earth orbit (LEO), just a few hundred miles from the planet. [Photos: NASA's Orion Space Capsule EFT-1 Test Flight]

If all goes according to plan, Orion will eventually fly farther than any Apollo capsule ever did, taking astronauts to near-Earth asteroids and — by the mid-2030s — the ultimate destination, Mars.

"I gotta tell you, this is special," Bob Cabana, director of NASA's Kennedy Space Center in Florida, said about EFT-1 during a press briefing last month. "This is our first step on that journey to Mars."

The challenges of deep space

Getting people safely to and from destinations in deep space poses challenges that the engineers of NASA's last crewed spaceship, the now-retired space shuttle, never had to consider. (No space shuttle ever traveled beyond Earth orbit.)

For example, if a problem develops aboard a spaceship in LEO, astronauts can theoretically be on the ground in less than an hour. But it would take days for a vehicle out by the moon or beyond to get home, said NASA Orion Program Manager Mark Geyer.

"So you've gotta have highly reliable systems, and you've gotta have capabilities to protect the crew in case of a contingency," he said during last month's briefing. [The Orion Capsule: NASA's Next Spaceship (Photos)]

One such capabilitiy will allow crewmembers aboard Orion to survive in their spacesuits for up to six days if the capsule gets depressurized, Geyer added.

"So if we have a totally depressed cabin, they can be in their suits and we can get them home," he said.

Deep-space vehicles are also exposed to higher radiation levels than vessels that stay in Earth orbit, where they are protected by the planet's magnetic field. So the shielding on Orion must be ample to safeguard the capsule's electronic equipment, Geyer said.

(Orion is designed to support astronauts for just 21 days at a time, so the need to protect crewmembers from radiation is not a big design driver. On longer missions — to Mars, for example — astronauts will spend most of their transit time in a deep-space habitat attached to Orion; the capsule's chief job is to get astronauts into space and back home again.)

Astronauts on deep-space missions will also return to Earth at much higher speeds than do crews that never venture beyond orbit.

"So the heat shield has to be different — different materials, different thicknesses," Geyer said. "And, actually, the physics of entry changes when you come back at those higher speeds."

The need to deal with those high re-entry speeds explains why Orion is a capsule, just like the spaceships that took astronauts to the moon and back during the Apollo program.

"The shape is the best shape for coming in from that high speed," said Mike Hawes, Orion program manager at the aerospace firm Lockheed Martin, which built the capsule for NASA.

Technology has also advanced a great deal since the Apollo command module was put together.

"The Avcoat material, which we're using on the [Orion] heat shield, is similar to the Avcoat used on Apollo, although we have had to make some changes due to materials changes," Hawes said. "But the technology of just about everything else that we used to put in Orion and to build Orion have changed dramatically in that time.

"You think of 50 years of manufacturing changes — it's a totally different world," he added. "And in fact, we do have additive-manufactured [3D-printed] parts on Orion today."

The huge Saturn V rocket that blasted Apollo toward the moon was retired long ago, so Orion will rely on a different launch vehicle as well. EFT-1 will use a United Launch Alliance Delta 4 Heavy rocket, but future Orion missions will ride atop NASA's Space Launch System megarocket (SLS), which is currently in development.

SLS and Orion are scheduled to fly together for the first time in 2017 or 2018, on the capsule's second unmanned test flight; the duo's first manned mission should come in 2021.