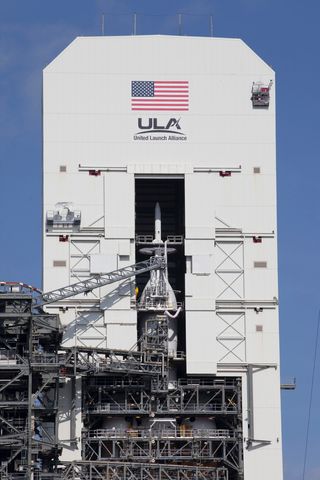 Orion stacked on top of the Delta 4 Heavy rocket that is expected to deliver it into space for its first test flight on Dec. 4, 2014.
(Image: © NASA)

The Orion spacecraft is set to launch Thursday at 7:05 a.m. EST (1205 GMT) from a pad here at the Cape Canaveral Air Force Station. A huge Delta 4 Heavy rocket, built by the United Launch Alliance, will loft the spaceship on its way, with current forecasts predicting a favorable 60-percent chance of good weather for the test flight.

The spacecraft has about 2 hours and 39 minutes to get off the ground before the launch window closes for the day, and at the moment officials are predicting a 60 percent chance that weather will be favorable during that time.

NASA officials are somewhat concerned that rain in the area Thursday could delay the launch, however, there is still a high chance that the rocket will be able to launch at some point in the long launch window. Officials also added that everything is looking good with the rocket and Orion ahead of the launch.

For Orion's first test flight — called Exploration Flight Test 1 (EFT-1) — the capsule will be lofted high above Earth, making two orbits of the planet before splashing down and hopefully being recovered in the Pacific Ocean about 4.5 hours later. Officials are also expecting good weather in the splashdown area Thursday.

Orion's second orbit will take it about 3,600 miles away from Earth, farther than any spacecraft built for humans has gone in more than 40 years. Earth will fill about 60 percent of Orion's window when it reaches that high point in its mission, NASA officials said.

After reaching its peak altitude, the spacecraft will then begin its descent back to Earth's surface. The Orion capsule will be exposed to extreme heat when it comes back through the planet's atmosphere from relatively deep space.

Officials are expecting that the capsule will be flying through space at 20,000 mph (32,000 km/h) when it slams into Earth's atmosphere. This speed will generate temperatures of about 4,000 degrees Fahrenheit (2,200 degrees Celsius), allowing officials to test the effectiveness of the capsule's enormous heat shield.

NASA officials hope that one day Orion will help deliver humans to Mars or an asteroid towed into orbit around the moon.

"Part of me hopes that everything is perfect," Mark Geyer, NASA Orion Program manager said during the news conference. "We land, high fives, everybody has a great time, but really, in a flight test like this, if there are subtleties in how the vehicle behaves with the environments, or subtleties with how systems actually behave with one another during flight, my hope it that we find that on this test flight."

The Orion spacecraft is flying with more than 1,000 sensors that will collect data allowing NASA officials to see how the capsule's important systems behave in the space environment. In total, 55 percent of the systems necessary for the first crewed mission will be used during EFT-1.

Orion's first launch atop NASA's new mega-rocket, the Space Launch System, is slated for December 2017, but that target could potentially slip later, Geyer said, adding that an updated launch target has yet to be released yet.

You can watch the history-making 4.5-hour Orion test live on Space.com via NASA TV Thursday, beginning at 4 a.m. EST (0900 GMT).