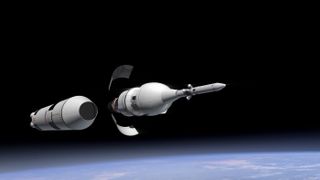 An artist's illustration of a portion of Orion's first test flight just after launch.
(Image: © NASA)

The space agency and Lockheed Martin — the company that manufactured Orion for NASA — have given the "go" to proceed with the capsule's robotic test on Dec. 4. The company and agency finished their "Flight Readiness Review" on Nov. 20, clearing the way for Orion's first test flight.

"The FRR [Flight Readiness Review] is a rigorous assessment of the spacecraft, its systems, mission operations and support functions needed to successfully complete Orion’s first voyage to space," NASA officials said in a statement. [See images of the Orion spacecraft]

NASA officials hope that Orion will eventually be able to take humans to deep space destinations like Mars, but first, the capsule's systems need to get through a series of flight tests starting with the first one next week.

Orion is scheduled to launch to space atop a United Launch Alliance Delta 4 Heavy rocket from Florida. The spacecraft is outfitted with more than 1,000 sensors to gather data about how the capsule performs under the harsh conditions in space and during re-entry.

In total, the test flight should last about 4.5 hours. Orion will make two orbits of Earth with one of them taking it as high as 3,600 miles (5,793 kilometers) from the planet. The spacecraft will gain speed as it comes back down from its position in orbit, before re-entering the atmosphere. Orion's heat shield is the largest of its kind ever manufactured, and the test will help scientists see if it can efficiently protect the capsule during re-entry.

The test — called Exploration Flight Test-1 — will also help officials check out Orion's parachute system, designed to slow down the spacecraft before its expected splashdown in the Pacific Ocean. Officials will be on hand to fish Orion out of the ocean after it returns to Earth.

NASA, U.S. Navy and Lockheed Martin officials have started to prepare for activities after splashdown.

"At Naval Base San Diego, two Navy ships, the USS Anchorage and the USNS Salvor, have been outfitted with the necessary tools and equipment needed to return Orion to land after the flight test," NASA officials said in the same statement.

You can download the press kit for the Orion test flight to learn more about it here: http://1.usa.gov/11KfbD0