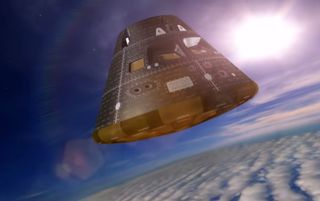 NASA is getting ready to launch a daring test flight of a capsule that could eventually bring humans to deep-space destinations like Mars or an asteroid.

On Dec. 4, NASA officials are expected to launch the Orion spacecraft on its first test flight, putting the capsule through its paces in space before it splashes down in the Pacific Ocean. The goal of the flight is to see how some key Orion systems — like its huge heat shield and parachutes — work before launching humans into deep space sometime in the future.

The mission — called Exploration Flight Test 1 (EFT-1) — is currently scheduled to launch atop a United Launch Alliance Delta IV Heavy rocket from NASA's Kennedy Space Center in Florida. During the flight, Orion will make two orbits of Earth, with one of them taking the capsule 3,600 miles (5,793 kilometers) into space. (For reference, the International Space Station orbits about 248 miles (400 km) above Earth.) [See images of the Orion space capsule]

"This is really our first step on our journey to Mars," William Hill, deputy associate administrator for explorations systems development at NASA, said during a news conference today (Nov. 6).

The test flight is also designed to help people on the ground learn more about the riskiest aspects of an Orion flight.

Although officials working with Orion (which is being built for NASA by Lockheed Martin) didn't need to make any changes to their plans in light of the recent Antares rocket explosion and tragic SpaceShipTwo accident, the risks of spaceflight are still at the forefront of their minds.

"We already recognize that space is hard," Geyer said. "We know we have challenges with that, but the whole idea of EFT-1 is to test those things, to learn about where the challenges are so that we can minimize the risk when we actually put people on board. It just reminds us of the risks we already understood, but we have not changed any of our plans."

Once launched, the spacecraft will jettison its launch-abort system, a structure put in place to propel an Orion capsule and its crew out of harm's way if something were to go wrong during a crewed launch. Once it completes its first orbit of Earth, the spacecraft will fire its rocket engine, boosting it up thousands of miles from the planet.

NASA officials on the ground will monitor key systems on the spacecraft during the 4.5-hour test.

"We do have radiation sensors on board, for example, so we're actually measuring different parts of the vehicle for what we're seeing, what the environment is inside," said Mark Geyer, Orion program manager. "We have 1,200 sensors, and a lot of those are loads, so they measure the impact loads when we land [and during] ascent. We'll get acoustic data inside and out, so we know how loud it is — those kinds of things. A lot of that is for the vehicle, but it's also to understand what the environment for the crew is going to be."

Orion's heat shield — the largest of its kind ever built — will be tested, having to withstand temperatures of up to 4,000 degrees Fahrenheit (2,200 degrees Celsius). The spacecraft's computers could also be susceptible to radiation, so the December flight should help NASA officials understand if harmful radiation could make the sensitive machinery malfunction.

Orion will also beam back pictures of its views from space throughout the test flight, NASA officials said.

Once Orion is retrieved and returned by a team in the Pacific Ocean, NASA officials hope to reuse the same capsule for another test flight in the future. The capsule's next flight will likely involve testing the spacecraft's launch-abort system, to see if it flies the capsule to safety under difficult conditions.