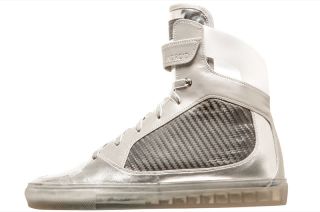 — General Electric's "The Missions" sneakers were designed to evoke the moon boots worn by Neil Armstrong and Buzz Aldrin 45 years ago.
(Image: © GE)

General Electric is taking a "small step" into sneaker design to commemorate the role — or rather, sole — it had in mankind's first "giant leap" on the moon.

Forty-five years to the day, hour, and minute after Apollo 11 moonwalkers Neil Armstrong and Buzz Aldrin made the first manned lunar landing at 4:18 p.m. EDT (2018 GMT) on Sunday, July 20, GE will release for sale its new moon boot-inspired, limited edition sneakers, "The Missions."

The company, which is perhaps publicly better known for its consumer appliances and lighting products, provided in 1969 the silicone rubber that was used to create the now-iconic tread that lined the bottom of the Apollo moon boot. GE also produced the Lexan polycarbonate plastic used in forming the astronauts' bubble helmets. [Photos: "The Missions" Moon Boot Sneakers]

"To celebrate the 45th anniversary of the original lunar landing and the sci-fi super materials that made it happen, GE and JackThreads decided to partner up to take that moon boot and create an updated, street-ready version so damn impressive, people will think whoever is wearing it might be from outer space," men's clothier JackThreads described on its website.

The sneakers, which are strictly limited to just 100 pairs, are set to go on sale Sunday exclusively on JackThreads for $196.90 commemorating the year of the moon landing. The shoes will be sold on a first come, first served basis, with delivery expected in September.

GE debuted "The Missions" Wednesday (July 16), on the anniversary of Apollo 11's launch atop a Saturn V rocket from NASA's Kennedy Space Center in Florida, using the social network SnapChat. The company also invited Buzz Aldrin to use the photo messaging service to share stories of his voyage to the moon and showed him wearing a pair of the sneakers.

The unisex "Missions," which were designed with the help of luxury shoemaker Android Homme, feature an off-white and gray color scheme with a translucent, thermoplastic sole. The redesigned moon boots have components made from the same lightweight carbon fiber used for jet engine components and they sport a hydrophobic coating similar to the materials that are used to prevent ice from forming on wind turbine blades.

"We re-imagined our lunar kicks with next-gen materials pulled from the belly of bad ass jet engines ... to not only commemorate GE's contribution to space flight but also our shared excitement for future awesome things," stated JackThreads.

"By highlighting super materials like stabilized carbon fiber and hydrophobic coating in our limited-edition sneakers, it helps people relate to the power of these technologies," she said.

Aldrin and Armstrong left their original pairs of trailblazing lunar overshoes at their landing site, Tranquility Base, due to the weight constraints for their moon rock-loaded return to Earth. In 2009, photographs captured by NASA's Lunar Reconnaissance Orbiter revealed that the boot prints left by the two astronauts remain visible today, more than four decades later.

Click through to collectSPACE.com for more photos of GE’s “The Missions” moon boot-inspired sneakers.

For more information or to order your pair, see JackThreads at: http://www.jackthreads.com/themissions.