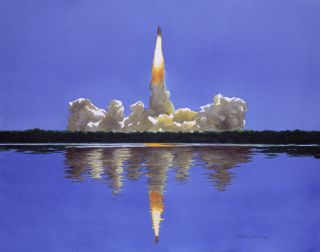 A space shuttle soars toward orbit in this painting by artist Barbara Prey, one of several artists featured in a NASA space art exhibit at the Smithsonian Institution's National Air and Space Museum in Washington, D.C.
(Image: © Barbara Prey)

As a child, Barbara Prey would watch her mother paint and dream that she, too, would someday become an artist.

In the years that followed, Prey has launched a successful career around her passion — being an artist and owning an art gallery (in Maine).

The New York-based artist is also one of a select few artists chosen by NASA to have their work displayed at the National Air and Space Museum as part of The Smithsonian Institution's traveling exhibit NASA|Art: 50 Years of Exploration.

Drawn from works in NASA and the National Air and Space Museum archives, the exhibit includes 50 paintings, drawings, photographs and sculptures commissioned to help describe the accomplishments, setbacks and excitement of space exploration. [Vote Now! Iconic Photos of Human Spaceflight]

Prey, who paints with watercolors, has had four pieces of work commissioned by NASA, including a painting of the X-43 aircraft, which is included in the current exhibit.

"NASA knew of my work, and I think it fit with what they were looking for," Prey told BusinessNewsDaily.

"I am really proud of the work I have done for NASA, and just honored to be part of that group," Prey said.

Prey’s other work for the space agency includes images of the International Space Station and the Columbia and Discovery shuttles. For each one, Prey spent months researching and touring NASA's facilities to get a behind-the-scenes perspective for what she was painting.

"It was really exciting to do all of the research," Prey said.  “I loved learning about the space program and astronauts."

Some of the most exhilarating times came when she was able to watch a launch in person and see pieces of the space station before its journey into space, Prey said.

"For an artist, that is really cool, because all that goes into a painting," she said.

Prey said the partnership between artists and scientists is a natural one.

"We are very creative, and both looking for answers," Prey said.  "There are a lot of overlaps."

In addition to her work for NASA, Prey has paintings on display in major museum collections, including the Brooklyn Museum and the Smithsonian American Art Museum. Her work also is part of the personal collections of former presidents George Bush and George W. Bush, as well as actor Orlando Bloom and former football player Boomer Esiason.

While turning a passion into a successful business isn't always easy, Prey said it is possible.

"You have to be practical about it, but it can be done," she said. "I try and make it so I can paint as much as I can."

NASA|Art: 50 Years of Exploration is on display at the National Air and Space Museum through Oct. 9.

This article was provided by BusinessNewsDaily, a sister site to SPACE.com.