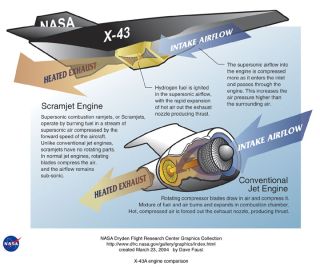 LOS ANGELES (AP) -- A tiny unmanned NASA "scramjet" soared above the Pacific Ocean Tuesday at nearly 10 times the speed of sound, or almost 7,000 mph, in a successful demonstration of a radical new engine technology.

The exotic aircraft was designed to fly under its own power for about 10 seconds after separating from a booster rocket at 110,000 feet, then glide to a splash landing.

Details of the craft's exact performance were to be announced later from Dryden, but mission officials were jubilant immediately after the brief flight.

The X-43A, mounted on a Pegasus rocket used to boost it to flight speed, was carried under the wing of a B-52 aircraft and released at an altitude of 40,000 feet over a test range off the Southern California coast. The rocket motor then fired for a 90-second ascent.

Like its predecessors, the X-43A will not be recovered from the ocean.

The flight was the last in a $230 million-plus effort to test technology most likely to be initially used in military aircraft, such as a bomber that could reach any target on Earth within two hours of takeoff from the United States, or to power missiles.

Scramjets may also provide an alternative to rockets for space launches.

Unlike conventional jet engines which use rotating fan blades to compress air for combustion, the X-43A has no rotating engine parts. Instead it uses the underside of the aircraft's forebody to ''scoop'' up and compress air for mixing with hydrogen fuel.

The X-43A launched Tuesday was the last of three built for NASA's Hyper-X program.

The first X-43A flight failed in 2001 when the booster rocket veered off course and was destroyed.

The second X-43A successfully flew in March, reaching Mach 6.83 -- nearly 5,000 mph -- and setting a world speed record for a plane powered by an air-breathing engine.

That was more than double the top speed of the jet-powered SR-71 Blackbird spyplane, which at slightly more than Mach 3 is the fastest air-breathing, manned aircraft.

The old X-15 was the fastest rocket-powered manned airplane, hitting Mach 6.7. Rockets do not "breathe" air, but instead carry oxidizers that are combined with fuel to allow combustion.

Not having to carry oxygen is one of the advantages scramjets hold over rockets. Rockets can also achieve high speeds, but the weight of oxygen tanks or other oxidizers reduces the amount of payload they can carry.

Tuesday's launch was expected to be the last research flight for NASA's B-52, which is being retired after some 40 years of service.