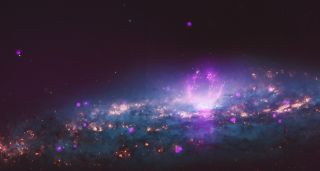 Astronomers have discovered a distant galaxy that's giddily blowing bubbles like a toddler with a glass of chocolate milk. Unlike milk bubbles, however, these two huge galactic balloons are filled with gas, stretch a few thousand light-years across and appear to be crackling with charged particles 100 times more energetic than any found on Earth.

Using data from the Hubble Space Telescope and NASA's Chandra X-Ray Observatory, researchers detected the bubbles jiggling near the center of a galaxy named NGC 3079, located about 67 million light-years away from Earth. Bubbles like these are known as "superbubbles" because, well, they're supersized. According to the team's study in the Feb. 28 issue of The Astrophysical Journal, one of the newly discovered bubbles measures 4,900 light-years across, and the other measures 3,600 light-years across. (For comparison, the diameter of Neptune's orbit around the sun is about 5.6 billion miles, or 9 billion kilometers — one-thousandth of one light-year.)

Superbubble formation could be a side effect of the mighty winds that gush out of newborn stars, NASA researchers wrote in a statement about the discovery. Or, they could be a product of supermassive black holes, which spit up gargantuan amounts of energy as matter plunges ceaselessly into their centers. (The researchers pointed out that there is one such black hole at the center of galaxy NGC 3079, conveniently positioned between the two bubbles.)

However these bubbles are blown, they are clearly highly energetic objects — or at least their edges are. As the outer regions of the bubbles collide with surrounding gases, huge shock waves resound through space. Charged particles crash against the magnetic fields in these shock waves "like balls rebounding off bumpers in a pinball machine," according to the statement, and they occasionally get booted at high speeds into space.

As such, the bubbles may serve as cosmic particle accelerators, potentially helping particles reach energies 100 times stronger than those generated by CERN's Large Hadron Collider. These high-speed, high-energy particles could be one source of the blazing cosmic rays that perpetually rain down on Earth, the researchers wrote. (Further research is needed to bear out this hypothesis.)

If that's the case, you could say that these giant space bubbles might be inadvertently spitting their nuclear cooties over us — not so different from toddlers, after all.