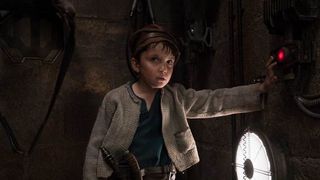 "Star Wars: The Last Jedi" writer/director Rian Johnson describes his upcoming Star Wars trilogy as "something that steps beyond the legacy characters." Johnson, who is set to begin pre-production on the films after he finishes work on November's "Knives Out," spoke with Observer about the anticipated new films.

"I think that the fun and challenging part of it is to dive in, figure out what's exciting and then figure out what it's going to be," Johnson said. "We're doing something that steps beyond the legacy characters. What does that look like? To me, the blue sky element of it is what was most striking about it. I know the way that I'm coming at it and what's fun about it for everyone in George Lucas' films is figuring out, 'What's the next step?' It really makes you think and figure out what the essence of Star Wars is for me and what that will look like moving forward."

Announced back in November 2017, Johnson will write and direct all three films of the new standalone trilogy, and has signed on to direct at least the first film. Lucasfilm has not set a release date for the films.