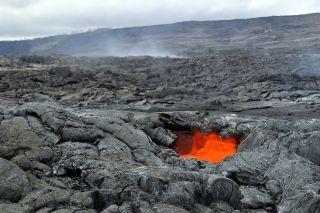 Allyson Brady is a Postdoctoral fellow at McMaster University. This article was originally published at The Conversation. The publication contributed the article to Space.com's Expert Voices: Op-Ed & Insights.

Imagine astronauts on Mars, tasked with picking rock samples that will be used by scientists to search for signs of life. But they can only transport a limited number back to Earth. What should they look for? Are some types of rocks better than others? They could try to ask for advice from the team of geologists and biologists back on Earth, but due to the distance between Earth and Mars it could take roughly 40 minutes before they would receive a response.

This isn’t practical when time outside of the spacecraft can only last for a few hours.

When humans are sent to Mars, it is important that these explorers have the support needed to help them do the best science possible.

How do we explore and do good science given necessary operational constraints? This is an important question that the National Aeronautics and Space Administration (NASA) and other space agencies, including the Canadian Space Agency, are interested in answering. Analogue missions on Earth help researchers understand how to do their jobs while faced with the many challenges that arise because of the hostile environment of space.

The Biologic Analog Science Associated with Lava Terrains (BASALT) research program explores and collects samples from places on Earth that are analogous to Martian environments. Building off similar previous analogue studies in Canada and the U.S., the BASALT program operates under simulated Mars mission conditions. Merging scientific, technical and operational research objectives, the insights gained during two major analogue mission deployments are detailed in a special issue of the journal Astrobiology.

Human exploration of Mars adds in a dynamic that doesn't exist when using rovers. Unlike a rover, a human can make decisions and respond to new unexpected discoveries during an extravehicular activity (EVA). This flexibility is valuable for scientific discovery but presents some challenges for planning EVAs. An important aspect of Mars exploration will be making decisions about which rock samples to collect that will help answer scientific questions about the history of Mars. While crews will receive training in geology and biology, expert scientists on Earth are available to help them make those decisions.

But don’t forget the unavoidable communications delay between Earth and Mars.

Simulated EVAs were conducted in two Mars analogue environments: Hawai'i Volcanoes National Park and Craters of the Moon National Monument and Preserve in Idaho. Scientists think that early Mars once had volcanic activity that could have created the kinds of habitats that we know contain life on Earth.

These two field sites were chosen as they represent past and present conditions on Mars. Scientists can then try to understand the link between biology and the geological characteristics to identify sampling locations for astrobiological studies.

Ideally, these would be geological features that can be seen from Earth's orbit, allowing Mars researchers to look for these same features and identify points of interest for future missions.

Planning a mission to Mars, even a simulated one, is no easy task.

First and foremost, the questions that guided the research were not simulated in any way: these were real questions asked about how microbes live in and interact with volcanic rocks.

I am a geobiologist and my expertise is in organic geochemistry. I want to know what microbes do in the environment and, importantly for astrobiology, what signs they leave behind. Within the BASALT program my research required that the samples were collected in a sterile manner, adding another complex layer to an already complex series of activities that must be done while facing the challenges of being in space.

Deviations from sampling protocols or not collecting enough contextual data about the sampling sites would have consequences for the validity of the results.

The BASALT team spent months planning the field deployments down to the last detail, including how many photos to take and estimating how long it might take to sample each rock. Individual sample sites in Idaho and Hawai'i were selected based on remote-sensing information available to the team (akin to using orbital satellite data to select landing locations on Mars).

On Mars, once astronauts are on the ground, they would follow pre-planned traverses and search for basalt rocks that would be used by the scientists for research.

A great deal of thought went into not only the type of data that the Mars crew would collect and send back to Earth for the scientists to examine, but also how they would then work with it and come to a decision about which rock they wanted the crew on Mars to sample. This could be affected by the conditions for communications including the bandwidth available: if low bandwidth conditions exist that limit transmission of data, could photos be used in place of high-resolution video? It’s like internet speed, if your connection is extremely slow you may rethink watching Netflix but you might still download those cat photos.

The BASALT program showed that it is possible to receive useful input from an Earth-based team over time delay. At the end of the program we learned quite a bit about how to effectively do this. For example, while video is helpful, high resolution photos are the preferred choice under bandwidth restrictions. Text, rather than voice communications were best for relaying important decisions between Earth and Mars. These and other results will be used to plan missions so that when we send humans to Mars we are doing the best possible job to answer fundamental questions about whether life ever existed there.