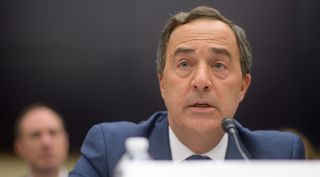 Mark Sirangelo left NASA after only a month and a half as a special assistant to the administrator after the agency's proposal to create a new mission directorate was rejected by Congress.
(Image: © NASA/Bill Ingalls)

WASHINGTON — A former space industry executive who joined NASA to guide its revamped lunar exploration strategy has left the agency after just a month and a half.

In an internal memo May 23, NASA Administrator Jim Bridenstine announced that Mark Sirangelo had stepped down as a special assistant to the administrator after a proposed reorganization of the agency was rejected by Congress.

That reorganization would have created a "Moon to Mars Mission Directorate" incorporating parts of the existing Human Exploration and Operations Mission Directorate (HEOMD) and Space Technology Mission Directorate. Bridenstine announced plans to create the directorate in March, when Vice President Mike Pence set the goal of landing humans on the moon by 2024, saying it would "focus on the formulation and execution of exploration development activities."

Bridenstine then announced in an April 8 memo that Sirangelo, a former executive vice president at Sierra Nevada Corporation's Space Systems, had joined the agency as a special assistant with "broad responsibility to work across the Mission Directorates to further develop the agency's plans for the Exploration Campaign." Sirangelo was widely seen as the likely choice to lead that new mission directorate.

Congress, though, rejected the proposed reorganization, although Bridenstine did not elaborate on the reasons why in his memo. Without the new directorate, "we will move forward under our current organizational structure within the Human Exploration and Operations Mission Directorate," he wrote. He added the agency was looking at potential changes within HEOMD "to ensure we maximize efficiencies" and stay on schedule for a 2024 crewed landing.

"Given NASA is no longer pursuing the new mission directorate, Mark has opted to pursue other opportunities," Bridenstine stated in the memo.

There had been skepticism both within and outside the agency about the need for a new mission directorate for the exploration plan. Within NASA, there were concerns that any reorganization would be disruptive and thus slow down, rather than speed up, lunar exploration efforts.

Congress had its own concerns about creating the new mission directorate, as it did last year when NASA floated proposals to effectively break up the Space Technology Mission Directorate, moving much of its work to HEOMD.

"The Committee reaffirms its support for the independence of the Space Technology Mission Directorate," stated the report accompanying the House version of a commerce, justice and science spending bill approved by the House Appropriations Committee May 22. "The Committee directs NASA to preserve the Directorate as a standalone entity within the agency, and to maintain its focus on broad technology development goals that are independent of mission-specific needs.

Rep. Kendra Horn (D-Okla.), chair of the House Science Committee's space subcommittee, also alluded to that in comments at a May 8 hearing on NASA's exploration plans. "The reason that I question this is that approach of using a reprogramming request, rather than going through the authorizing committee, to propose major reorganizational changes," she said, noting at the time the lack of details on the overall plan and its cost.

Sirangelo appeared with several other NASA officials at a May 21 meeting of the NASA Advisory Council's science committee to discuss the agency's exploration plans. Those comments did not address the status of the Moon to Mars Mission Directorate. He noted he had been working on "what a realistic plan to return to the moon by 2024 might be," he said, adding that the goal was "certainly daunting."