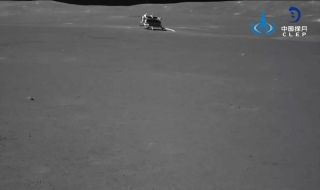 China's Chang'e-4 lander as seen on the moon in a photograph released on July 9.
(Image: © China Lunar Exploration Project)

China's Chang'e-4 mission has completed eight full days of science work on the far side of the moon — and in between the experiments, the lander and rover have sent home some new photographs, too.

The mission touched down in early January, becoming the first robotic mission to land on the far side of the moon. Here, days and nights each last the equivalent of about two weeks on Earth, and the nights are brutally cold.

But for now, the mission seems to be holding up against the harsh conditions. During their seventh workday, which ended on July 9, the two robots completed a range of measurements using neutron detectors, radiation instruments, infrared spectrometers and radio devices.

The duo then powered down for a two-week nap to wait out the frigid night before waking up again on July 26 for another workday that ended on Aug. 7. According to the China Lunar Exploration Project, by the end of that eighth workday, the rover had traveled a total of 890 feet (271 meters) across the far side of the moon.

The far side of the moon is quite different from the side we're used to seeing from Earth, and scientists don't understand how those differences arose. They hope the data gathered by the Chang'e-4 lander and Yutu-2 rover will help decipher that mystery.