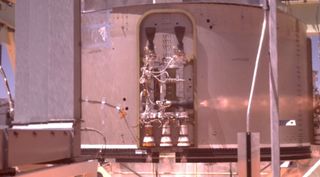 WASHINGTON — Boeing has completed ground testing of the thrusters for its CST-100 Starliner commercial crew vehicle, nearly a year after a setback in earlier testing of those thrusters.

In a statement, Boeing said it completed hot-fire testing May 23 of the spacecraft's entire propulsion system, including various thrusters, fuel tanks and related systems within a "flight-like" service module of the spacecraft. Those tests took place at NASA's White Sands Test Facility in New Mexico.

A series of tests demonstrated thruster firings for in-space maneuvers, high-altitude aborts and low-altitude aborts. The company said the tests were all successful.

"With the safety of our astronauts at the forefront of all we do, this successful testing proves this system will work correctly and keep Starliner and the crew safe through all phases of flight," said John Mulholland, vice president and program manager of the commercial crew program at Boeing.

The success of the testing allows the program to move ahead with a pad abort test later this summer. An uncrewed launch of the Starliner spacecraft, similar to SpaceX's Demo-1 flight of its Crew Dragon spacecraft in March, is scheduled for no earlier than mid-August. A crewed flight test, carrying two NASA astronauts and Boeing test pilot Chris Ferguson, is scheduled for late this year.

Boeing completed the engine tests after suffering an anomaly during a test of the launch abort engine system last June. In that test, valves failed to close properly, causing hypergolic propellant to leak.

The company said last summer that anomaly didn't cause damage to the test article, and that "minor design changes" as well as operational changes were planned to correct the problem.

However, that test campaign didn't restart until recently. NASA said in an April 3 statement that Boeing was "preparing to restart its Service Module Hot Fire test campaign" this spring at White Sands. "New hardware, including launch abort engine valves, have been redesigned and manufactured and are being installed on the test abort engines," the agency said.