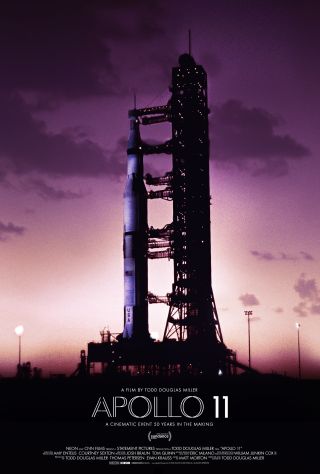 "Apollo 11" is launching onto the small screen, the giant screen and the only screen in outer space.

The Todd Douglas Miller documentary, which features newly-discovered, large format footage of the first moon landing mission, is getting its broadcast premiere on Sunday (June 23). A special cut of the film is also continuing to expand into science centers and museums around the world. Off of the planet, "Apollo 11" has been uplinked to the International Space Station, where the crew can watch it as they desire.

"'Apollo 11' has surpassed even our highest expectations," Courtney Sexton, vice president for CNN Films, and Amy Entelis, executive vice president for talent and content development for CNN Worldwide, both executive producers for the film, said in a statement preceding CNN airing the film on Sunday. "Todd's work has now become a part of the history of the moon mission. The film restores the grand adventure as it was originally experienced by those who lived it and observed it all over the world."

Assembled primarily from archival footage and more than 11,000 hours of audio recordings, Miller and his production team worked closely with the National Archives and NASA to locate, digitize and restore all of the available media related to the moon landing mission. The result, "Apollo 11," offers viewers an immersive experience of the original July 1969 mission flown by Neil Armstrong, Buzz Aldrin and Michael Collins.

"We hope future generations will be thrilled by this exceptional film experience in each of its forms," said Sexton and Entelis.

CNN will air the 92-minute documentary on Sunday at 9 p.m. and 11 p.m. EDT, with encores on June 29 and July 20, the latter the 50th anniversary of the first lunar landing.

"We're thrilled to be working with CNN Films again on this groundbreaking project. The response to the film so far has been overwhelming and we're excited to share the experience of the Apollo 11 mission with CNN's audience," said Miller, founder of Statement Pictures.

"Apollo 11" premiered at the 2019 Sundance Film Festival and was released in commercial IMAX and traditional movie theaters by NEON in March. "Apollo 11" is now among the top 31 documentaries of all time at the North American box office.

Concurrent with the broadcast premiere, a giant screen version of the film, titled "Apollo 11: First Steps Edition," is being distributed by MacGillivray Freeman Films to museums and science centers worldwide. The 47-minute cut is formatted for IMAX and dome screens and includes extended large format scenes that are not in the full-length documentary.

"With the incredible find of so much pristine, never-before-seen footage and new audio recordings, our project evolved beyond filmmaking into one of film curation and historic preservation," said Thomas Petersen, "Apollo 11" producer. "This new material yielded remarkable new insights into key events of the mission."

The "First Steps Edition" is now playing or will soon be opening in museum and science center theaters in more than half of the United States and in Australia, Canada, Denmark, France, Germany, Japan, Spain, Switzerland, The Netherlands and United Kingdom. Among the venues are the Kennedy Space Center Visitor Complex in Florida, the National Air and Space Museum in Washington, D.C., and Science Museum in London.

The full-length "Apollo 11" documentary is also being distributed to international theaters and on Blu-ray, DVD and video on demand by Universal Pictures.

To support Sunday's broadcast, CNN has produced a five-part podcast, "Apollo 11: Beyond the Moon," hosted by CNN chief media correspondent and anchor of "Reliable Sources," Brian Stelter. Available wherever podcasts are distributed, "Beyond the Moon" features interviews with Miller, Collins, Apollo 11 launch team member JoAnn Morgan and historian Douglas Brinkley, among others.

During the June 23 premiere, "Apollo 11" will stream for subscribers via CNNgo and via CNNgo apps for AppleTV, Roku, Amazon Fire, Chromecast, Samsung Smart TV and Android TV and on the CNN mobile apps for iOS and Android. The film will be available beginning Monday (June 24), on demand via cable/satellite systems, CNNgo platforms and CNN mobile apps.