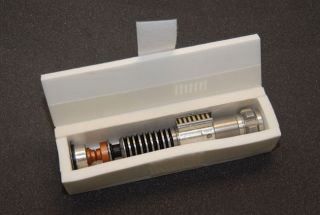 Item number 22 is for Pam Melroy's alma matter. StephanieWilson chose to fly number 52 in connection with her former summer job. Items70 through 78 will be returned by Paolo Nespoli. And oh, yes, item 18 is LukeSkywalker's lightsaber ...

The contents of the STS-120 Official Flight Kit (OFK)are as varied as the mission's astronauts and for good reason: they selectedmost of the mementos to be packed inside. Along with the few personal souvenirsthat they are flying for family and friends inside smaller preference kits, the2 cubic feet alloted by the OFK are the crew's means to say thanks to theschools, companies, civic centers and other organizations that have supportedthem over the years.

This particular mission aboard space shuttle Discovery isespecially busy, with five spacewalks scheduled to assist in preparing theInternational Space Station for the arrival of international science labs, buteven were the astronauts to have an abundance of free time, the items in theOFK would remain stowed for the length of the 14-day mission, with only a fewexceptions.

"Oh, I've got a lot of little things," explainedcommander Pam Melroy in a preflight interview with collectSPACE.com. "Ihave a banner from my brother's son's school district in upstate New York [item 28]. I have some mementos from several different schools that I haveconnections with [e.g. item 22].

"For me, what I have really been focusing on isactually the Expedition crew," continued Melroy, referring to the spacestation's residents. Together with ISS commander Peggy Whitson, Melroy issetting a record for the firstfemales to lead space flights at the same time. "We have a few specialflight data file slots, as we call them, where things you can actually take outand play with on orbit. So for me, I have been really focused on selecting someunique gifts, both for the station crew and also some little surprises for myown crew."

Melroy was coy about what those items were, as she did notwant to spoil the surprise, but she did share a hint. "I will tell youthat the stuff for the Expedition crew may have something to do with the factthat we're approaching the holiday season," she teased.

STS-120's commander wasn't the only crew member with theholidays on her/his mind. DanTani, who on Thursday transferred from Discovery's to the station's crew,is as of now scheduled to return home with the next space shuttle mission,before Christmas. So, has he packed gifts for his two young daughters?

"I am bringing some jewelry for my daughters and for mywife but I am not bringing anything specifically Christmas-wise," ISSExpedition 16's newest flight engineer replied. "In fact the worse thingsort of, in this situation that could happen is that we anticipate I will behome for Christmas and then something happens, and all of sudden I amnot."

Instead, Tani is bringing pictures and movies of his family,as well as memorabilia related to his favorite sports team.

Speaking several weeks before his flight, Tani shared,"I have with me some Cubs memorabilia so if they choose to go all the waythis year, I'll be proud to display that and help them celebrate. I've spent mywhole life as a Cubs fan, maybe I had to leave the Earth to see them go all theway [to the World Series]." Sadly, that was not to be, as Taniacknowledged when he arrived in Florida last week in preparation for thelaunch.

"I was thinking about how thankful I am to my belovedCubs who allowed me to fully concentrate on my mission this October by givingme the time to not have to worry about staying up late watching baseballgames," he said with a wide smile.

"He used to play for the New York Yankees, and when Igrew up in upstate New York, he was my hero," Wheelock toldcollectSPACE.com. "Right around Christmas of last year, he was diagnosedwith a brain tumor and he came here to MD Anderson [Cancer Center] in Houston to get treatment. I reached out to him to try to share what he has meant tome over the years, giving me a sense of teamwork ... just kind of a role modelto me."

"We have met several times now and he's become a dearfriend. I am carrying one of his jerseys to space with me, as well as one ofhis baseball cards, it's actually a [card] with him and Pete Rose on thebaseball card, for him," he said.

Continue reading about the crew's choices and StarWars director George Lucas' advice to the astronauts at collectSPACE.com.