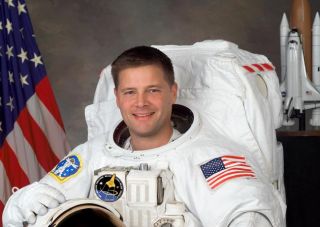 PERSONALDATA: Born May 5, 1960 in Binghamton, New York and considers Windsor, New York to be his hometown. Doug?s parents, Olin and Margaret Wheelock,reside in upstate New York.

EXPERIENCE: Colonel Wheelock received hiscommission as a Second Lieutenant in the Army Infantry from West Point in May 1983. He entered flightschool in 1984, graduated at the top of his flight class and was designated asan Army Aviator in September 1984. Subsequently served in the Pacific Theateras a combat aviation Section Leader, Platoon Leader, Company Executive Officer,Battalion Operations Officer, and Commander of an Air Cavalry Troop in the 9thU.S. Cavalry. He was later assigned to the Aviation Directorate of CombatDevelopments as an Advanced Weapons Research and Development Engineer. Heearned a Master of Science degree in Aerospace Engineering from Georgia Tech in1992, with research in the areas of hypersonic and high temperature gas dynamics,flight stability and control, and automatic control and robotics. He wasselected as a member of Class 104 at the U.S. Naval Test Pilot School and uponcompletion was assigned as an Experimental Test Pilot with the Army AviationTechnical Test Center (ATTC). His flight testing was focused in the areas oftactical reconnaissance and surveillance systems in the OH-58D(I), UH-60A/L,RU-21H and C-23 aircraft. He served as Division Chief for testing of ArmyScout/Attack aircraft and weapons systems in support of tactical operations inthe Balkans. Colonel Wheelock?s work as a test pilot culminated in hisassignment as Division Chief for fixed-wing testing of airborne signal andimagery intelligence systems in support of the National Program Office for Intelligenceand Electronic Warfare. He is also a graduate of the Army Airborne and AirAssault Courses, the Infantry and Aviation Officer Advanced Courses, TheCombined Arms Services Staff School, the Material Acquisition ManagementCourse, and the U.S. Army Command and General Staff College.

Colonel Wheelockis a dual-rated Master Army Aviator; and has logged over 2500 flight hours in43 different rotary and fixed-wing aircraft. He is also an FAA-rated CommercialPilot in single and multi-engine land craft, rotorcraft, and gliders.

NASAEXPERIENCE:Colonel Wheelock reported for Astronaut Candidate Training in August 1998.Following the initial two years of intensive Space Shuttle and Space Stationtraining, he was assigned to the Astronaut Office ISS Operations Branch as aRussian Liaison, participating in the testing and integration of Russianhardware and software products developed for the ISS. He worked extensivelywith the Energia Aerospace Company in Moscow, Russia, developing and verifyingdual-language procedures for ISS crews. Colonel Wheelock led joint U.S./Russianteams to the Baikonur Cosmodrome in Kazakhstan to oversee bench reviews, inventory, loading and launch of the firstfour unmanned ISS resupply capsules.

In 2001,Colonel Wheelock assumed duties as the Crew Support Astronaut for the ISSExpedition 2 crew, which was on orbit for 147 days from March 2001 to August2001, and for the ISS Expedition 4 crew, which was on orbit for 195 days (U.S. long-duration record) from December 2001 to June 2002.He was the primary contact for all crew needs, coordination, planning andinteractions, and was the primary representative of the crews while they wereon orbit. In August 2002, Colonel Wheelock was assigned as a SpacecraftCommunicator (CAPCOM) in the Mission Control Center in Houston. In this role, he was the primarycommunication link between crews on orbit and the ground support team in the Control Center. His work as a CAPCOM culminated in his assignment as thelead CAPCOM for the ISS Expedition 8 mission, which was 194 days in duration.

In January2005, Colonel Wheelock was assigned to the Gagarin Cosmonaut Training Center(GCTC) in Star City, Russia, as NASA?s Director of Operations?Russia. He wasresponsible for supporting Russia-based training, logistic, and administrativeneeds of NASA astronauts preparing for flight on the ISS. Colonel Wheelock wasthe primary liaison between Star City and NASA operations in Houston, including medical, training,science, contracting, public affairs, and administration departments. He wasalso responsible for liaison duties between NASA and the Russian Space Agency,as well as the Russian aerospace industry.

Colonel Wheelockis qualified to fly aboard the Space Shuttle and the International SpaceStation. He has completed qualification in the Extravehicular Activity (EVA)Skills program, the Canadian Space Agency MSS Robotics Operator (MRO) course,and qualification as a Cosmonaut Flight Engineer in the Russian Soyuzspacecraft. In July 2004, Colonel Wheelock completed training in the NASAExtreme Environments Mission Operations (NEEMO) program, during a 10-dayundersea mission aboard the National Undersea Research Center?s Aquarius habitat.

Colonel Wheelockis assigned to Space Shuttle mission STS-120, designated as flight 10A in theISS assembly sequence. The crew will deliver the Italian-built Node 2connecting module to the ISS, as well as relocate the P-6 truss segment toallow for future ISS expansion and increased power generation. Colonel Wheelockwill conduct both EVA and robotics operations during the mission?s threescheduled spacewalks. The STS-120 crew is scheduled to launch in the fall of2007, aboard the Space Shuttle Discovery.