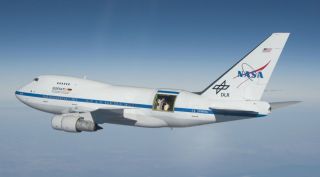 Flights by NASA's SOFIA airborne observatory are on hold during the government shutdown.
(Image: © NASA)

SEATTLE — The ongoing partial government shutdown has grounded a NASA aircraft used for astronomical observations amid reviews about how to operate that program in the future.

The Stratospheric Observatory for Infrared Astronomy (SOFIA), a Boeing 747 with a 2.5-meter telescope mounted in its fuselage, has been unable able to perform any science flights since the shutdown started Dec. 22, project officials said during a town hall session about the program Jan. 8 during the 233rd Meeting of the American Astronomical Society (AAS) here.

"We know we've lost flight opportunities in Cycle 6, and I apologize to the [principal investigators] who are going to suffer because of this," said Harold Yorke, director of SOFIA science mission operations at the Universities Space Research Association, at the meeting, referring to the ongoing program of observations that SOFIA was carrying out.

The situation with SOFIA stands in contrast with NASA spacecraft missions, which are able to continue operations. The agency's shutdown plan states that "tracking, operation, and support" of satellites is excepted from the shutdown "for safety and protection of life and property." That doesn't apply to an airborne program like SOFIA, which can meet the safety and protection requirements by simply remaining on the ground.

The shutdown, besides grounding science flights, also prevented SOFIA from making an appearance at the AAS meeting. Prior to the shutdown, the program planned to fly SOFIA to Boeing Field in Seattle and host tours for conference attendees.

Once the shutdown ends, Yorke said it will take about a week to resume SOFIA science flights because of the time needed to prepare both the aircraft and the telescope's instruments. "We will be rethinking the rest of Cycle 6 to see how we can replan and perhaps recover some of this lost time," he said.

The shutdown is not the first recent interruption of SOFIA science operations. Maintenance of the aircraft in Germany, scheduled to be completed last January, took months longer than anticipated because of additional repairs and inspections triggered by a fuel leak.

"That played havoc with Cycle 6. We lost a number of flight opportunities," Yorke said. An adjusted schedule of flights helped the program rebound from that delay. "We were able to recover basically all of the lost targets."

The shutdown comes as the program was carrying out two reviews of its science and operations. NASA mandated the reviews last year after Congress forbid the agency in fiscal year 2018 from spending any money on a senior review of astrophysics missions that included SOFIA. With conflicting language in House and Senate bills for fiscal year 2019 about including SOFIA in a senior review, NASA opted instead to conduct separate reviews of the program.

The first of those reviews, called the SOFIA Operations and Maintenance Efficiency Review (SOMER), is nearing completion. "They're looking at alternate models for operating SOFIA and maintaining SOFIA," Yorke said, that would reduce costs or increase its flight rate. That report is scheduled for completion in February.

That will be followed by the Flagship Mission Review (FMR), which will focus on SOFIA science. That review will be completed under what he termed a "compressed schedule" for delivery to NASA in the spring. "NASA needs the results to formulate its future plan for SOFIA based on both the SOMER and FMR reports," he said, which he anticipated to come in May.