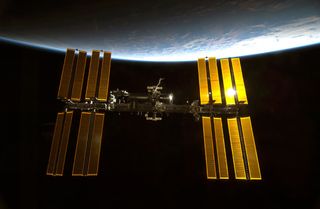 The International Space Station, photographed by an astronaut aboard the space shuttle Endeavour in February 2010.
(Image: © NASA)

The United States government just shut down for the third time this year, and a lot of NASA employees will be staying home as a result.

The partial shutdown went into effect Saturday (Dec. 22) at midnight EST (0500 GMT), after the White House and Congress failed to hammer out a funding agreement.

Most NASA personnel will be furloughed until such an agreement is reached, agency officials explained recently in a shutdown FAQ. "Most" is something of an understatement, in fact; about 95 percent of NASA employees won't be able to go to work.

But don't panic: There are "excepted" employees, such as the folks responsible for keeping NASA people and property safe. And "property" includes currently operational spacecraft, as well as the data they collect.

So, operations aboard the International Space Station will continue pretty much as before, and NASA won't have to cancel important upcoming spaceflight events such as the OSIRIS-REx probe's Dec. 31 orbital insertion around the asteroid Bennu, or the New Horizons spacecraft's Jan. 1 flyby of the distant object Ultima Thule.

"However, if a satellite mission has not yet been launched, unfunded work will generally be suspended on that project," NASA chief financial officer Jeff DeWit wrote earlier this week in a memo to James Hertz, Program Associate Director at the U.S. Office of Management and Budget.

"The extent of support necessary and the time needed to safely suspend project activities will depend on whether any of the activities are of a hazardous nature (e.g., parts of the satellite may need to be cooled)," DeWit added.

We also won't be able to keep tabs on NASA missions and discoveries as closely; the folks responsible for running NASA TV and keeping the agency's website updated will be furloughed for the duration of the shutdown.

It's unclear how long that will be, of course, but recent history provides reason to hope that things will get back to normal soon. The previous two shutdowns of 2018, which occurred in January and February, both lasted less than 72 hours.

To learn more about what's in store, check out the NASA shutdown FAQ: https://www.nasa.gov/sites/default/files/atoms/files/shutdownfaqs-09-28-2015-update.pdf

Mike Wall's book about the search for alien life, "Out There" (Grand Central Publishing, 2018; illustrated by Karl Tate) is out now. Follow him on Twitter @michaeldwall. Follow us @Spacedotcomor Facebook. Originally published on Space.com.