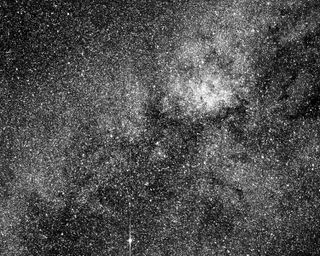 One of the first test images from NASA's new Transiting Exoplanet Survey Telescope (TESS) shows a swath of the Milky Way galaxy. NASA scientists working on the TESS mission will not be able to present new science results at the 233rd meeting of the American Astronomical Society due to the government shutdown.
(Image: © NASA/MIT/TESS)

The American Astronomical Society's biggest annual gathering, a conference dubbed the "Super Bowl of astronomy," kicks off in Seattle today (Jan. 6). But the team will be short a few hundred players this year, thanks to the government shutdown.

Nearly 3,200 astronomers, astrophysicists and other scientists were scheduled to attend the 233rd meeting of the American Astronomical Society (AAS), which runs from Sunday through Thursday (Jan. 6-10) at the Washington State Convention Center.

However, the AAS estimates that 300 to 450 of those registered will be unable to attend due to the government shutdown. More than 380,000 "nonessential" federal workers — including 95 percent of NASA's employees — are now entering their fourth week of furlough, or unpaid leave. This means that any NASA employees who planned to attend the conference and present science results will have to sit out the conference instead. [How the Government Shutdown Affects NASA]

Some of the science that will be presented include early results from NASA's new Transiting Exoplanet Survey Telescope (TESS), which launched in April on a mission to look for alien worlds. Researchers will also be presenting new observations of black holes, supernova explosions, mysterious radio bursts detected in deep space, neutron-star collisions and gravitational waves. And this list only scratches the surface; more than 2,400 lectures, short talks and poster presentations are on the docket for the conference.

However, the government shutdown will likely mean that not all of those talks and presentations will actually happen, because the federal employees responsible for them will still be barred from attending the conference. If federal funding it not restored, "there could be a lot of empty poster boards, missing oral talks," Kevin Marvel, AAS executive officer, told The Washington Post. "It's just going to be a mess."

In a statement published on Facebook yesterday (Jan. 3), AAS officials said the government shutdown would be "highly detrimental to the meeting, but it is not going to be a devastating impact." To accommodate any furloughed researchers who cannot attend the meeting, the AAS will allow co-authors to give presentations, even though the rules have always required lead authors to do so. Plenary sessions will also be streamed live online for registrants who cannot attend. (Those webcasts are not open to the public, but the daily news conferences are. You can watch those here.)

You can find more information about the AAS conference, including a full list of speakers, at aas.org/meetings/aas233.