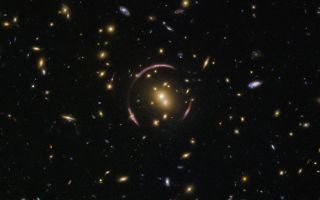 The graceful arcs at the center of this image from the Hubble Space Telescope are actually the distorted light of distant galaxies, twisted to form an "Einstein ring" by the gravitational influence of the closer galaxy cluster SDSS J0146-0929.
(Image: © ESA/Hubble & NASA; Acknowledgment: Judy Schmidt)

The perfect circle surrounding a galaxy cluster in a new Hubble Space Telescope image is a visual indicator of the huge masses that are bending time and space in that region.

The galaxy cluster, called SDSS J0146-0929, features hundreds of individual galaxies all bound together by gravity. There's so much mass in this region that the cluster is distorting light from objects behind it. This phenomenon is called an Einstein ring.

The ring is created as the light that comes from distant objects, like galaxies, passes by "an extremely large mass, like this galaxy cluster," NASA said in a statement. "In this image, the light from a background galaxy is diverted and distorted around the massive intervening cluster and forced to travel along many different light paths toward Earth, making it seem as though the galaxy is in several places at once." [Hubble's Most Amazing Discoveries]

The ring is named after Albert Einstein, who wrote his theory of general relativity in the early 1900s. In it, he suggested that a massive object would warp space and time. This process is known today as a gravitational lens. When the most massive galaxies and galaxy clusters get in line with a more distant object, they produce an Einstein ring – a type of gravitational lens.

Einstein rings (and gravitational lenses more generally) give astronomers a huge advantage when they are trying to look at faraway objects. The rings and lenses magnify objects that otherwise would be too distant and dim to see in today's telescopes.

In 2015, for example, astronomers took advantage of an Einstein ring to look at star-forming regions in a galaxy formed just 2.4 billion years after the Big Bang. This will provide more insight into how galaxies came together in the early universe.

Another Einstein ring popped up in 2016, in a star group within the Sculptor dwarf galaxy. At the time, researchers said there are less than a dozen known Einstein rings that are partial or full. The scientific team added that they plan to use this particular Einstein ring in Sculptor to probe the nature of dark matter. This may help scientists learn about the large-scale structure of the universe, since roughly 80 percent of it is made up of dark matter and dark energy, which cannot be directly observed.