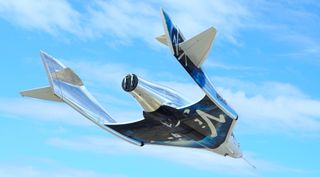 The funding from Saudi Arabia will support Virgin efforts like SpaceShipTwo, a suborbital vehicle that will begin a series of powered test flights in the near future.
(Image: © Virgin Galactic)

HUNTSVILLE, Ala. — The Virgin Group announced Oct. 26 an agreement with Saudi Arabia's sovereign wealth fund for an investment of $1 billion into Virgin's suborbital and orbital space ventures.

The non-binding memorandum of understanding between the Virgin Group and the Public Investment Fund (PIF) of Saudi Arabia covers a partnership whereby the fund will take a "significant" stake in Virgin Galactic, Virgin Orbit and The Spaceship Company for $1 billion, with an option for $480 million in future investment in the companies.

The companies did not disclose when the non-binding agreement would become a binding investment. Ollie Pratt, a spokesman for the Virgin Group, did not disclose the size of the stake PIF was taking but that Virgin would remain the majority shareholder in the companies. [Virgin Galactic's SpaceShipTwo in Pictures]

Virgin said the investment would accelerates its existing plans for human spaceflight and small satellite launch services, and support development of future services, including point-to-point commercial supersonic flight and "the possibility to develop a space-centric entertainment industry" in Saudi Arabia, according to a statement.

"We are now just months away from Virgin Galactic going into space with people on board and Virgin Orbit going into orbit and placing satellites around the Earth," Richard Branson, founder of the Virgin Group, said in a statement. "This investment will enable us to develop the next generation of satellite launches and accelerate our program for point-to-point supersonic space travel."

The announcement was made at an event called the Future Investment Initiative in the Saudi Arabian capital of Riyadh organized by the PIF. That invent brought together a number of companies and investors "to explore the evolving role of sovereign wealth in driving the next wave of business, innovation, technology and investment," according to a description on the event's website.

"The future of Saudi Arabia is one of innovation, as showcased at this week's Future Investment Initiative, and it's through partnerships with organizations like Virgin Group that we will make active contributions to those sectors and technologies that are driving progress on a global scale," said Prince Mohammad bin Salman Al-Saud, Crown Prince of Saudi Arabia, whose roles include serving as chairman of the PIF, in a statement.

The agreement is pending regulatory approvals, the companies said. This will likely include the Committee on Foreign Investment in the United States, the Treasury Department office that reviews investments by foreign entities in American companies for any national security or other issues.

Virgin Galactic is approaching the beginning of powered flight tests of its second SpaceShipTwo suborbital vehicle. Branson, in recent public comments, said he expected the vehicle to make its first suborbital spaceflight by the end of the year and start carrying people, including Branson himself, in as little as six months. Company officials are more reticent to offer schedules. SpaceShipTwo is built by The Spaceship Company, a former joint venture with Scaled Composites now owned by Virgin.

Virgin Orbit, spun out of Virgin Galactic in March, is developing the LauncherOne smallsat air-launch system. The company anticipates performing its first launch in the first half of 2018.