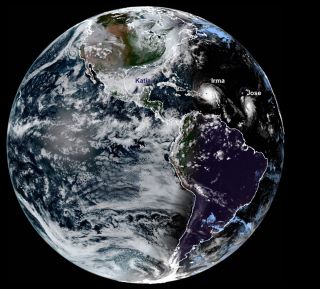 Irma, a powerful Category 5 storm, is currently battering Puerto Rico and on track to slam into Florida, while Jose is barreling toward the Caribbean Islands, while Katia is menacing the Gulf of Mexico. Both Jose and Katia intensified from tropical storms into hurricanes today (Sept. 6).

The last time three hurricanes were active at once was 2010, when hurricanes Igor, Julia and Karl were classified as hurricanes, according to records from the National Oceanic and Atmospheric Administration (NOAA).

The record for the most hurricanes active at once is four — that was set in 1998 when Hurricanes Georges, Ivan, Jeanne and Karl intensified simultaneously. Before that, the last time four hurricanes were active at the same time was Aug. 22, 1893.