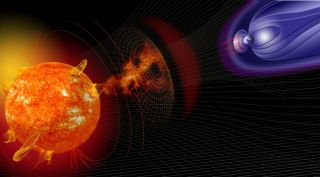 COLORADO SPRINGS — Despite current low levels of solar activity, space weather experts warned April 5 that the sun could still produce powerful and unpredictable storms that could disrupt activities in space and on the earth.

A panel during the 33rd Space Symposium here said that, despite the development of new space-based sensors to monitor solar activity, predicting when powerful storms could strike remains difficult.

"The current solar cycle is the weakest we've observed," said Scott McIntosh, director of the High Altitude Observatory and associate director of the National Center for Atmospheric Research. "Cycle 25, or at least the initial traces of it that we expect to see in the next decade, may be even half the amplitude of that." [The Worst Solar Storms of All Time]

He warned, though, that low overall activity doesn't correlate with reduced risks of powerful storms. "While that may mean fewer [coronal mass ejections] and flares, in a backward sense that actually appears to be increasing the probability of a major storm," he said.

"We often don't talk about the solar cycle anymore because it's a little bit misleading," said William Murtagh, program coordinator for the National Oceanic and Atmospheric Administration's Space Weather Prediction Center. "Some expect that the maximum of activities in the 11-year cycle is when we should see things, and then the minimum we let our guard down and have nothing to worry about. That is not the case."

Solar storms — powerful blasts of magnetized plasma that escape the sun's atmosphere — have the potential to damage spacecraft in orbit, distort navigation signals and impact terrestrial infrastructure such as power grids. Researchers are concerned that recognizable solar patterns have not yet led to the ability to predict when solar storms are going to occur.

Stephen Volz, the assistant administrator for NOAA Satellite and Information Services, said that COSMIC-2A, a GPS radio occultation constellation expected to launch in 2018, will also aid solar research. COSMIC-2A is designed primarily for collecting data on terrestrial weather, but will be able to measure disturbances in the upper atmosphere coming from solar activity.

McIntosh said solar scientists are beginning find connections between global waves within the sun's interior and storm-inducing coronal mass ejections. But little is understood regarding how to build on this potential link, he said.

"From a research domain we don't know when the sun is going to erupt," he said. "That's the trillion dollar question. We also don't know how severe that eruption will be. Many of these things are informed guesswork. Will there be a flare? Will there be a coronal mass ejection? Will the two come hand-in-hand? We don't know."

McIntosh likened geomagnetic bursts to a "space hurricane," adding that, like its terrestrial counterpart, the impact site, strength and time of arrival are all critical details. Finding the polarization of the storm — a detail more specific to space weather — is more difficult, he said.

Murtagh, who recently completed a two-year assignment as assistant director for the space weather, energy, and environment division of the White House Office of Science and Technology Policy, said OSTP has been working with the Department of Homeland Security and the Federal Emergency Management Agency to protect U.S. infrastructure from geomagnetic storms. If a large space storm does occur, like the Carrington Event in 1859 that set telegraph equipment ablaze, the U.S. will need to have the ability to respond and recover, he said.

"You could say we are just one major catastrophe from a fully funded program," Volz said, prompting laughter at what was only partially a joke.

"I'm very much concerned with space weather," said McIntosh. "Space weather, as far as I can see from a research perspective, is a series of coin flips. What level of coin flipping is acceptable?"