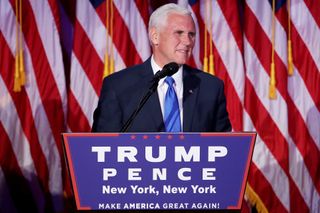 Robert Walker, former chairman of the House Science Committee, used a speech at the 11th Annual Eilene M. Galloway Symposium on Critical Issues in Space Law here to discuss the space policy he developed for the Trump campaign and to emphasize some issues, like the future of Earth science research, that have been sharply criticized by scientists and others.

One element of that policy is to re-establish the National Space Council, which last operated in the administration of President George H. W. Bush. Traditionally, that council has been chaired by the vice president, and Walker said in an interview after his speech that Pence was interested in chairing a revived council. [Related: What a Trump Administration Means for NASA]

"He is excited about doing the space council," Walker said of Pence. "He has expressed absolute excitement about that particular role. I think that will be a place where he will find time for it."

Walker added that having Pence taking an active role in the council will ensure that all government stakeholders, including the military, participate in the council, something Walker said was a problem the last time the council was active. "The vice president being there will basically assure that the military takes part," he said.

Walker, in his speech, praised Pence in general, including for taking over leadership of the transition in the days after the Nov. 8 election. "That's a signal for exactly what the character of this administration is going to be," he said. Walker said he expected Pence to serve as a "prime minister" handling the day-to-day operations of the government, with Trump being a "world and national figure."

"Somebody should be looking at that and deciding whether or not all those various technologies are needed," he said of those efforts. "Commercial can do whatever they want in this regard, but the fact is we ought to know whether or not we'd be better off buying services from them our building our own systems. That's a role the National Space Council could play."

Walker reviewed other elements of the space policy the campaign released in the weeks before the general election, including a call to move Earth sciences research from NASA to other agencies. "Operation of the Earth-centric government missions will be turned over to more appropriate agencies under our plan," he said. "NASA is to focus on deep space, both in terms of its science and its exploration. The idea here is that NASA will turn its full attention back to its early goals of being an agency of exploration and learning about space writ large."

That particular aspect of the proposed policy has been widely criticized by many scientists and other space advocates, concerned that the incoming administration seeks to end research particularly in controversial areas like climate change. Walker, asked about that issue, said that was not the intent of the policy.

"We're not talking about ending the programs. We're talking about transferring the programs, lock, stock and barrel, to another agency," he said. "I've seen some misinterpretation saying that we were looking at ending the whole business of climate science. That wasn't the concept at all. The concept here is to put it in places like NSF, NOAA and places that have vast expertise in those areas."

Walker did not discuss the details of how such a transfer, including that of personnel and facilities, would be carried out. Other government agencies, even those that operate their own Earth science satellites today, often rely on NASA for its expertise and other resources to develop and launch those spacecraft.

Walker, who said he is advising the transition team but not formally serving on it, said elements of that policy could change. "This is not exactly where the team will go," he said of the policy, which Walker quickly developed in early October at the request of the Trump campaign. "There are a lot of things that are happening, and of course, ultimately, personnel make policy."

Walker also said he had no interest in being among those personnel making policy. Asked if he was interested in the position of NASA administrator, Walker quickly replied, "I am not. I am interested in finding a good person who can do all of these things that I just talked about, but it isn't going to be me."