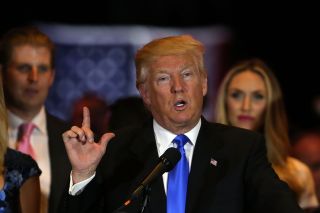 What NASA programs will President-elect Donald Trump support, which will he potentially work to eliminate, and whom will he nominate for NASA's top leadership position? Two space policy reporters offered their insight on these questions.

Brian Berger is editor in chief at SpaceNews, a trade publication for the spaceflight industry, and Jeff Foust is a senior writer there. In a webinar on Wednesday (Nov. 9), Berger and Foust discussed how the new presidential administration might affect NASA and other U.S. space-related activities.

Mars or the moon

Foust published an article yesterday (Nov. 9) outlining the information that Trump's campaign has provided about the president-elect's space plan. Most of that information comes via Robert Walker — former chairman of the U.S. House Committee on Science, Space and Technology and former chairman of the Commission on the Future of the U.S. Aerospace Industry — who was brought in to serve as the campaign's space policy advisor.

In Foust's article, Walker described the campaign's space plan with four words: visionary, disruptive, coordinating and resilient. Walker then outlined nine key goals of the plan. Some of those goals are "fairly broad," Foust said yesterday, including the declaration that Trump's administration will make a "commitment to global space leadership" for the United States.

It remains to be seen what specific actions the Trump administration will take to accomplish the goals that Walker laid out. Prior to the election, President-elect Trump and his campaign representatives made multiple statements voicing support for partnerships with private companies, including the intention to hand over operations in low Earth-orbit (which would include the operation of the International Space Station) to private industry. Such partnerships are already up and running; SpaceX and Orbital ATK are flying robotic cargo missions to the space station for NASA now, and SpaceX and Boeing are scheduled to begin ferrying American astronauts to and from the orbiting lab in the next year or two.

NASA is committed to its current level of support for the space station through 2024, and agency officials as well as leaders in the spaceflight industry have also voiced support for a plan that would relieve NASA of its financial responsibility to the station after 2024. Those funds could then be put toward the agency's efforts to send humans to more distant space locations.

It seems likely that the Trump administration will put particular emphasis on human space exploration, Berger and Foust agreed. One of the most ambitious goals set out by Walker calls for "human exploration of the solar system by the end of the century." Foust said Walker called this a "stretch goal" intended to "help drive some of the technology that will be needed for human exploration of Mars."

NASA is already working to get humans to the surface of the Red Planet by the first half of the 2030s, as instructed by President Barack Obama. But things may change under President-elect Trump.

Right now, NASA is developing a capsule called Orion and a massive rocket known as the Space Launch System (SLS) to get astronauts to distant destinations, such as Mars. Orion flew its first mission, an uncrewed test flight to Earth orbit, in December 2014; the SLS is scheduled to fly for the first time in late 2018, on a mission that will send an uncrewed Orion around the moon. But Berger said during the webinar that he thinks it's possible President-elect Trump could be swayed by arguments that the SLS program is unnecessary for NASA. That's partly because there are commercial companies also working on rockets with heavy-lift capacity (meaning they could also send humans and other payloads all the way to Mars), Berger said.

What's more, many spaceflight experts have said that NASA should establish a long-term human presence on or near the moon before heading to Mars. That goes against the plan laid out by President Obama, who nixed a human return to the moon, instead directing NASA to use a visit to a near-Earth asteroid as a "stepping stone" to Mars (more on that below). An independent report also showed that NASA can't currently afford to invest in a lunar and a Mars mission simultaneously.

"Bob Walker mentioned that he personally thought it was a good idea to have the moon as a stepping stone on the path to Mars," Foust said. "Certainly a lot of other people in the space industry, including other people who may end up on the transition team or have contacts with people on the transition team, are going to bring that up. I would not be surprised if that was revisited somehow."

A human presence on the moon could involve international partnerships, Foust said. "But how that works out and how that gets paid for will be one of the big issues for the next administration," he said.

One of the only highly partisan aspects of NASA's current program is its Earth science program.

"A number of prominent Republicans on Capitol Hill think that NASA should not be involved to the degree that it is in Earth science," Foust said. Those representatives generally favor handing NASA's Earth science responsibilities over to the National Oceanic and Atmospheric Administration (NOAA), the United States Geological Survey (USGS) or another agency.

Space policy experts who spoke with Space.com prior to the election said the stance held by many Republicans on climate change has driven this party divide.

In an op-ed published in SpaceNews, Walker and Peter Navarro, another space advisor to the Trump campaign, said that NASA should not be focused on "Earth-centric activities."

Foust said that, currently, Earth science accounts for about 10 percent of NASA's budget. If NASA's Earth science program is reduced or eliminated, that money could be shifted elsewhere within NASA, or to another agency that picks up those responsibilities.

"I would certainly expect to see some sort of development in terms of potential reduction to NASA's Earth science program," Foust said.

Another program that may also be on the chopping block is NASA's Asteroid Retrieval Mission (ARM), said Berger and Foust. The program aims to capture an asteroid and put it into orbit around the moon, where it could be studied and potentially mined for resources. The program was intended as a stepping stone to Mars because the technologies that would be developed for that program could then be used in a human Mars mission. Supporters say the program would also serve the goal of preparing humanity to redirect an asteroid away from a collision course with Earth.

Some members of Congress have already been "calling for a hard look" at ARM, said Berger.

"Certainly, there is a lot of skepticism about ARM going forward," Foust said. "I suspect the next administration is going to take a hard look at it. It may go away and be replaced with something else."

But Foust said it's unclear where the funding currently going toward ARM would be redirected.

"Again, it comes down to what sort of resources are going to be available for NASA and how the new administration decides to rework NASA's current human-exploration plans to fit in with what is arguably a much more expansive mission for human exploration … that Walker describes," Foust said.

Based on what President-elect Trump and his campaign representatives have said, there's no immediate indication that the administration will cut NASA's budget in any significant way.

"Bob Walker mentioned that he does not expect huge increases in NASA's budget," Foust said. "There may be some modest increases and may be some shifting of funding around."

President-elect Trump will also be able to nominate an administrator and deputy administrator for NASA (the top two positions at the agency). The appointee then has to be confirmed by the Senate.

Foust and Berger said the discussion about who President-elect Trump will nominate for the position of administrator has only just begun. NASA's current administrator, Charles Bolden, had stated before the election that he would retire from that position regardless of the outcome.

"It may take a while for [the administration] to settle on someone," Foust said. "And you may hear … a number of names getting mentioned in SpaceNews or elsewhere … that may or may not come to fruition for one reason or another, because they're not interested, or it just doesn't match up. So it may be some time before we actually get a firm idea of who the next confirmed NASA administrator will be."