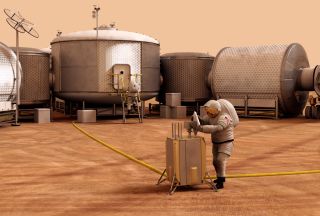 NASA is targeting a manned mission to Mars in the 2030s, but big challenges loom for a trip to the Red Planet.
(Image: © NASA)

NASA can't afford to put humans on Mars while also pursuing missions to put astronauts back on the moon, according to a panel of experts who testified to the U.S. House of Representatives Subcommittee on Space yesterday (Feb. 3).

"Today the future of NASA's human spaceflight program is far from clear," said Tom Young, former director of NASA's Goddard Space Flight Center. "There has been continual debate about should we go to the moon or Mars or both … It is clear, again, that we cannot do both. And there is a need to focus our attention, capability and resources on one option."

NASA has been advertising its "Journey to Mars" campaign, with NASA Administrator Charles Bolden saying that humans could go to the Red Planet as early as the 2030s. But in addition to the technological and fiscal hurdles, the three panelists agreed that without a solid plan in place, none of the proposed human-spaceflight goals would come to fruition. [5 Ideas for Manned Missions to Mars]

"In the current fiscal environment, there are no good pathways to Mars," said John Sommerer, retired director of the Space Department at Johns Hopkins University.

Sommerer contributed to a report that Congress asked the National Academy of Sciences to assemble, which looked at the feasibility of human spaceflight endeavors. The results of its investigation were released in a report called "Pathways to Exploration," in 2014.

The report concluded that "the first crewed Mars landing might be possible 20 to 40 years from now, after a cumulative expenditure on the order of half a trillion dollars," Sommerer said.

"Just as it is not feasible to take a cross-country trip on a child's allowance … we may well never be able to get to Mars at current expenditure levels," Sommerer said. "It might be better to stop talking about Mars if there is no appetite in Congress and the administration for higher human spaceflight budgets, and no willingness to cut programs that do not contribute to progress."

Subcommittee member Ed Perlmutter, D-Colo., spoke enthusiastically to the panel about the possibility of a human mission to Mars, and pointed out some of the young people in the room who might be the ones to go to Mars. He showed the panel a bumper sticker that read "Mars 2033: We Can Do This." He pressed Sommerer to confirm that, if given a sufficient budget, NASA could put humans on Mars in only 17 years.

"If you give [NASA] the date, and the money, and help with the discipline, the answer is yes," Sommerer said. "If any of those three things is missing, the answer is almost certainly no."

Mo Brooks, R-Ala., noted that the United States is currently facing serious budget concerns. He mentioned the Constellation program — which aimed to put humans back on the moon by 2020, but which was defunded in 2010 — and asked the panelists to talk about how to avoid putting money into missions that would ultimately not come to fruition, and what lessons could be learned.

Young spoke about the desire to have fewer "tombstones" for cancelled projects and more "memorials" to successful ones. He reiterated the thesis of his opening remarks, that what NASA needs more than anything is a concrete plan for how it should proceed.

In a response to Brook, Sommerer brought up the possibility of defunding human spaceflight and relying entirely on robotic missions, which are "much more cost effective."

"That's a choice that, in really grim financial straits, the country might be forced to make," Sommerer said. "But it doesn't seem to be something people want to stand up and proudly say, 'Let's end the human space endeavor and rely on only robots.'"

He added, "Although the robot stuff is pretty cool."

The third member of the witness panel was Paul Spudis, a senior scientist at the Lunar and Planetary Institute at the Universities Space Research Association. Spudis' research is focused on the geology of the moon. In his opening remarks, Spudis laid out reasons why NASA and humanity should not only return humans to the surface of the moon, but also develop an entire infrastructure in cislunar space (the space between Earth and the moon) that would include "transport vehicles, staging nodes, deep-space habitats, power stations and fuel depots."

In the journey to send humans to other planets, a pit stop at the moon might be the right way to go, Spudis argued. A moon base might help humans develop technologies and know-how to survive on Mars. Humans could potentially harvest resources from the moon, like water, which can be used to keep humans alive — as well as broken up into oxygen and hydrogen to fuel spacecraft. Having access to those resources could make a trip to Mars more feasible, he said. (This is a discussion going on in congress for some time).

"America's space program is in disarray," Spudis said. "What we need is a logically arranged set of short-term, realizable space goals that are not only interesting in and of themselves, but whose attainment will build capability in the long term."

Spudis also spoke about the need to have crewed spacecraft that can be used to visit satellites that humans are relying on more and more for communications and other daily services, such as GPS.

"Many of these satellites are national security assets. Satellites upon which we are critically dependent," Spudis said. Currently, when those satellites break, often the only option is to let them die and replace them, Spudis said.

"If we could move people and machines throughout various locales in cislunar space, we would be able to replace, construct, upgrade and maintain satellites," he said.

Spudis also said that China is developing the ability to "travel throughout and loiter within cislunar space," which might enable the country to disable satellites belonging to other countries. Such a move would put the United States at a disadvantage if it didn't have the same capabilities, he said.

A cislunar program would also offer NASA a set of goals that could be obtained on much shorter timelines than a human mission to Mars. The appeal of financing a set of shorter-term goals, rather than a single, long-term goal, was echoed by subcommittee member Dana Rohrabacher, R-Calif., who expressed concern at the prospect of investing in a human Mars mission, only to have it set aside if a more pressing priority arose.

It is highly unlikely that the United States would be able to afford to simultaneously pursue a human mission to Mars while also deploying human missions to the moon or cislunar space, said Young during his testimony.

If congress decided to push for NASA to pursue a human mission to Mars, Young said, the agency would need to develop a specific plan in the near future "that takes us from today to humans on Mars." He listed a dozen things that such a plan would need to address, including defining intermediate missions that would be needed to prepare for a Mars trip, assessing risk, getting an idea of the resources that would need to be allocated and applying those resources "in the most effective manner."

"An argument against a plan at the current time is that we are not ready to finalize the necessary elements of the plan," Young said. "I believe a strength of NASA program management is to establish a plan relatively early, with the recognition that as new information becomes available, the plan can be changed."

"We have our work cut out to us," subcommittee chair Brian Babin, (R-Texas, 36th District) said in his closing comments. "I agree that whatever NASA puts their mind to we can do. But we do have the parameters of an almost 20 trill dollar national debt that we have at this time. … I think we have our marching orders. We just have to get organized on this."