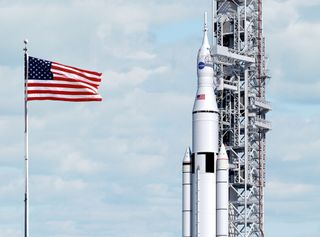 An artist's illustration of NASA's huge Space Launch System rocket at the launchpad with an Orion space capsule.
(Image: © NASA)

Ahead of tomorrow's presidential election, some voters may wonder what each candidate will do for America's space program. So Space.com spoke with space policy experts to see what they had to say.

The president of the United States has a substantial influence on NASA's leadership, budget and program direction. The president nominates the NASA administrator and deputy administrator (the top two leadership positions in the agency). In addition, the president's budget proposals can deeply affect NASA, like when President Obama's 2011 budget effectively ended NASA's multi-billion-dollar Constellation program, which would have returned humans to the moon.

But it's almost impossible to know what direction each candidate might choose for the American space program before the leader enters office, said two space-policy experts who spoke with Space.com. On the campaign trail, space isn't an issue that will sway many voters, so the candidates tend to remain fairly vague about what stance they'll take on particular policies, programs and position appointments. [50 Years of Presidential Visions for Space Exploration]

"No presidential candidate has ever won a state on the basis of his or her position on the space program," said John Logsdon, a professor emeritus of political science and international affairs at George Washington University's Elliott School of International Affairs in Washington, D.C. "It's really not an electoral issue in terms of deciding outcomes."

He added that while space may not be a deciding issue, "Every candidate, in one form or another, has to formulate a campaign position on space." Logsdon founded the Elliott School's Space Policy Institute in 1987 and wrote two books about presidential administrations and the space program.

Overall, Logsdon said neither of the presidential candidates for the two major political parties this year has said a great deal about space policy. In that regard, Logsdon said, he hasn't seen any major differences between this year's contest and presidential campaigns in the recent past.

The Planetary Society, a nonprofit organization dedicated to space education, advocacy and outreach, has been collecting statements made by Hillary Clinton and Donald Trump (or by their campaign representatives) that relate to NASA and space policy. Those statements are available to view on the Planetary Society website.

How do the candidates differ?

Logsdon said he has not heard anything from either of the candidates or their campaigns regarding space that is particularly bold or noteworthy. He also said that in space policy, "I don't see much difference between the two [candidates]."

There are two subtle points on which Clinton and Trump seem to differ: The first is that the Trump campaign has said that NASA should spend little or no effort studying the Earth from space.

"NASA should be focused primarily on deep-space activities rather than Earth-centric work that is better handled by other agencies," by Robert S. Walker and Peter Navarro, both senior advisors to the Trump campaign, wrote in the op-ed published in SpaceNews on Oct. 19.

"[Earth science] is the one area of NASA that has been very politicized over the last few years, mainly because Earth science relates to climate change," said Casey Dreier, director of space policy at the Planetary Society. As a nonprofit, the Society must remain nonpartisan, but is permitted to have a stance on particular policies, including bills and budgets that affect space, as well as particular missions within NASA.

Logsdon also said that Republican party leaders in congress have pushed to "get NASA out of the Earth-observation business," because "it's linked to their skepticism about the validity of climate change." Last year, NASA Administrator Charles Bolden defended NASA's Earth-observing activities to members of the Senate Commerce space subcommittee, some of whom questioned whether those activities were in line with NASA's "core mission."

In the op-ed published in SpaceNews on Oct. 25, Jim Kohlenberger, who is the former chief of staff for the White House Office of Science and Technology Policy for President Obama wrote, "As our planet warms, melting ice sheets, altering ocean chemistry and affecting the lives of every person, NASA and NOAA's [National Oceanic and Atmospheric Administration] low-Earth orbit and Earth-observation programs are invaluable in furthering our understanding of what those changes mean for everything from the safety of coastal communities to global weather patterns."

Dreier said he thinks it is likely Clinton would "continue the Obama administration's prioritization of [Earth] science at NASA, keeping funding at around 1.8 [billion] to 2 billion [dollars] a year."

Logsdon said decisions about NASA's role in Earth science constitute one of the top issues the next president will face.

Another difference between the two campaigns is the specific mention of a council to advise the president on space-related issues. In the op-ed by Walker and Navarro from Oct. 19, they specifically stated, "A Trump administration would end the lack of proper coordination by reinstituting a national space policy council headed by the vice president."

Kohlenberger's op-ed about Clinton didn't mention such a council specifically, but he stated that in order to "solve problems more effectively and expeditiously, [Clinton] will elevate executive-branch coordination of federal agency space initiatives."

Logsdon said he thinks the phrase "elevate coordination" is "a way of saying the same thing without committing to the space council mechanism."

Announcing plans to form a space council might be a way for the candidates to show that space will be important to their administration, Dreier said.

"But the caveat there is that it's utterly up to president how much he or she listens to [the council]," Dreier said. Appointing a space council is "not a bad thing, but it's not a slam dunk either. It is an encouraging sign that [space] will be taken seriously, but it's not a requirement."

What issues will the next president have to deal with?

Logsdon and Dreier agreed that the next president will have to make a major decision regarding NASA's current plan to send humans to Mars. NASA is working to build the Space Launch System (SLS) rocket and the Orion space capsule, which will be able to carry humans to deep-space destinations. (However, additional hardware, including a long-duration space vehicle and Mars landing system, will be needed for those missions.) In the meantime, NASA has contracted Boeing and SpaceX to build spacecraft that can fly humans to the International Space Station and low-Earth-orbit destinations.

But the first commercial crew missions won't fly until 2017 at the earliest, and the first crewed flights of the Orion human space capsule aren't expected until at least the early 2020s.Dreier said this isn't an unpredicted transition: The U.S. also had a period between the end of the Apollo program and the beginning of the space shuttle program when the country didn't have an in-house system for flying humans into space.

"The next president is inheriting a space program that has this nascent ambition to go to Mars, but doesn't have hardware actually flying yet," Dreier said. "So there's a lot of opportunity for the next administration to say, 'Should we continue these [programs]? What will the direction be? Do we want to commit to supporting these programs as is? Do we change them? Do we cancel them?' … So it's a big question mark."

In addition, experts at NASA and in the human spaceflight community are debating the merits of establishing a more permanent human presence on the moon, before sending people to the Red Planet. NASA doesn't have the budget to do both, Dreier said, so a decision to focus on the moon would mean an end to NASA's current plan to send humans to Mars by the first half of the 2030s.

The next president may also have to decide whether the United States will continue to partially operate the International Space Station beyond 2024, Logsdon said. Space industry experts have discussed possible options for bringing in commercial partners to take up part of the cost of operating and maintaining the station. Another alternative is to retire the station (it will eventually age out of its safe operational lifetime) and let low-Earth-orbit activities take place in private space stations.

Another major NASA milestone scheduled to take place during the next administration is the launch and deployment of the James Webb Space Telescope (launch is scheduled for 2018), which has been plagued by budget overruns. During a press conference on the current status of Webb, Bolden addressed a question about how the program might be affected by the entrance of a new administration.

"We're about to go through a period of what we call the transition," Bolden said. "We have done what I have always said about NASA: We told people what we were going to do, we made a commitment of a schedule and time, and we have been on that for about six years now. So I think the story we have to tell [and] the record of performance that we have should stand us in good stead. But I think anybody would be crazy to tell you that anything [can survive] over a transition. But I'm comfortable [about Webb], as I am about most of what NASA is doing today."

When will we know how the next administration will handle space policy?

Even after Americans find out who their next president will be, it could still be some time before that person reveals his or her plans for space, Dreier said. Because space is not generally considered a top presidential priority, the emphasis that any administration places on that area can depend largely on the president's personal passion for it. But even a president's enthusiasm may run up against budget concerns. Dreier gave the example of George H.W. Bush, who campaigned passionately to initiate human missions to the moon and Mars. The project was deemed far too costly and never moved forward.

"Historically, we've seen that it tends to be up to the interest of the president or the interest of key members of congress to really drive [space] policy," Dreier said. "And that is hard to predict in advance."