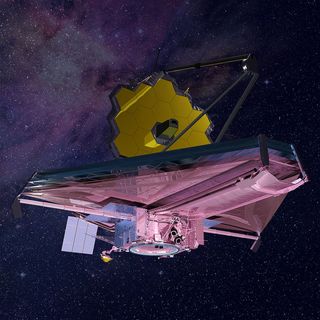 NASA's successor to the Hubble Space Telescope is on schedule and budget for now, space agency officials told members of Congress today (March 24).

The James Webb Space Telescope (JWST) — scheduled to launch to space in three years — is expected to peer deep into the universe to help scientists learn more about the mechanics of the cosmos. Due to replace the Hubble telescope, the JWST will also beam back amazing images of the cosmos from its place in space, about 932,000 miles (1.5 million kilometers) from Earth. The JWST will even help scientists hunt for alien planets that are relatively near Earth.

The $8.8 billion telescope project has also been notorious for cost overruns and delays through the course of its development, but NASA officials confirmed today that the telescope should be ready in time for its 2018 launch. [See photos of James Webb Space Telescope]

"This next great space observatory, and indeed the world’s most powerful planned space telescope, remains within budget and on track to meet its October 2018 launch readiness date," NASA associate administrator in the science mission directorate John Grunsfeld said during a U.S. House of Representatives space subcommittee hearing today. "Just as important to the success of the program, NASA will meet the science community’s ambitious goals with Webb [JWST]."

Cristina Chaplain, of the United States Government Accountability Office, did stress that people involved with the project need to remain vigilant if the telescope is going to remain on track for launch. Officials do have about 10 months of reserve time, which could provide some wiggle room in the schedule should problems arise. The next phase of the JWST project could prove to be particularly difficult and may result in delays, Chaplain said.

"The JWST project continues to report that it remains on schedule and budget with its overall schedule reserve currently above its plan," Chaplain said in her testimony to Congress. "However, the project is now entering a difficult phase of development — integration and testing — which is expected to take another 3.5 years to complete."

"Maintaining as much schedule reserve as possible is critical during this phase to resolve known risks and unknown problems that may be discovered," Chaplain added. "Being one of the most complex projects in NASA’s history, significant risks lie ahead for the project, as it is during integration and testing where problems are likely to be found, and as a result, schedules tend to slip."

NASA officials are now pulling the JWST together. Engineers are in the process of testing the telescope's tennis court-size sunshield, designed to keep instruments on the craft cool so that they can perform science from deep space.

Once launched, the JWST will be tasked with using its sensitive machinery to search for objects in the early universe. The telescope might even be able to help scientists discover how the galaxies of the early universe formed, JWST scientist and Nobel Prize winner John Mather told Congress today.

"We are an exceptional country for even dreaming up something like Webb, and we are close to seeing this dream realized," Mather said.