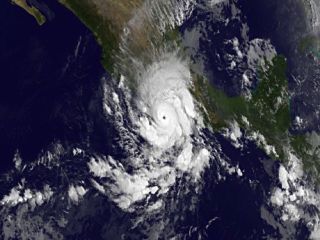 This infrared image of Hurricane Raymond was taken on Oct. 21, 2013, at 1200 UTC/8 a.m. EDT when it was a major hurricane and it was lashing western Mexico.
(Image: © NASA GOES Project)

Hurricane Raymond has been menacing the Pacific coast of Mexico with heavy rains, strong winds, storm surge and rough surf. Before Raymond blew up into a major hurricane yesterday (Oct. 21), satellites snapped pictures of the nearly stationary storm.

Raymond first formed as a low-pressure system that quickly developed over the weekend and had strengthened into a hurricane by late in the day on Sunday. By early Monday morning, it had strengthened further still into a major hurricane, one that ranks a Category 3 or higher on the Saffir-Simpson scale, with winds of 120 mph (195 km/h).

NASA's Terra satellite flew over Raymond on Sunday while it was still a tropical storm hovering off the southwestern coast of Mexico. The following day the National Oceanic and Atmospheric Administration's GOES satellite got a shot of the storm, now a major hurricane. The GOES image shows a more organized storm with a clearer central eye, both signs that a storm has gathered strength. [Amazing Hurricane Photos from Space]

Raymond has continued to stay fairly stationary off the Mexican coast, but could show what the NHC calls erratic slow movement today, possibly moving closer to the coast before steadily moving out to sea for the rest of the week.

The NHC warned that Raymond could bring rains of 4 to 8 inches (10 to 20 centimeters) in Guerrero and Michoacan states, with some places even seeing up to 12 inches (30 cm). Such rains could cause mudslides and flash flooding, which Mexico has already suffered from repeatedly during this year's hurricane season from both Pacific and Atlantic storms. In September, the Pacific's Hurricane Manuel and the Atlantic's Hurricane Ingrid hit Mexico's two coasts, causing extensive flooding and killing dozens.