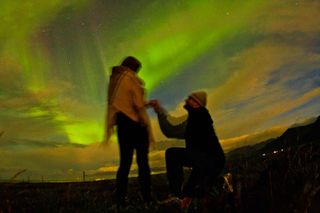 Dazzling green, purple and turquoise auroras glimmer in the sky over Iceland while a man proposes to his girlfriend in a new time-lapse video.

Neuroscientist Alex Rivest shot the amazing aurora time-lapse video, which featured his own proposal, over several days and nights in September 2012.

"On a trip to Iceland I asked my girlfriend to marry me under the aurora borealis," Rivest wrote in a video caption. "She said yes."

The couple is seen hugging after Rivest bows down on one knee toward the end of the footage, all while gorgeous displays of the Northern Lights dance in the night sky.

"Iceland is a pretty amazing place to watch the stars and the aurora," Rivest told SPACE.com.

The aurora borealis, as well as its Southern Hemisphere counterpart, the aurora australis, is created when charged particles from the sun hit atoms in Earth's high-altitude atmosphere, which are directed by the planet's magnetic field. The resulting light show has been dubbed the northern lights in the north, and the southern lights in the south.

The aurora time-lapse was shot with a Canon 5D Mark II and a Canon 40D, using a triggering device from pclix.com.

This isn't the first time an astronomical event has served as a backdrop for a marriage proposal caught on video. Last year, stargazer Shookie Basuroy proposed to girlfriend Rajeep while watching a total solar eclipse from a hot air balloon above Cairns, Australia, on Nov. 14.