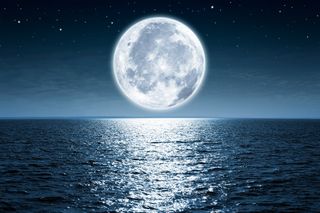 NASA's new Artemis program aims to land the first woman on the moon in 2024. Here's a look back at the history of women and the moon in literature.
(Image: © rangizzz/Shutterstock)

In the late 17th century, the female English playwright Aphra Behn wrote a smash hit play about a man obsessed with the moon, who was constantly travelling there in his imagination. Exactly 282 years later, Neil Armstrong and Buzz Aldrin actually made that dream a reality.

Their astonishing achievement on July 20, 1969 led some to worry that the moon would become an object of purely scientific study – a barren and lifeless body, no longer a source of romantic inspiration. Fortunately, this fear did not come to pass.

For example, in the year that marked the 40th anniversary of the landings ten years ago, the then poet laureate Carol Ann Duffy edited To the Moon: An Anthology of Lunar Poems which gathered together works from ancient to modern, and included her own poem, The Woman in the Moon.

And while no woman has yet stepped on to this celestial body, women have long been associated with the moon – with its tidal pull, and the binary thinking that places it secondary in majesty to the sun. It is no wonder, then, that the moon has stimulated some incredible literature by female writers.

The moon is often envisaged as a female entity, which inspired poems on the theme of her gaze as she looks down on Earth benignly. Way back in antiquity, the Greek poet Sappho did just this in her short song describing how:

When, round and full, her silver face, Swims into sight, and lights all space.

This trope continued for millennia and into the 19th century. Louisa May Alcott (author of Little Women) wrote The Mother Moon in 1856, imagining a benevolent maternal moon looking down on the Earth, occasionally hidden but ultimately undiminished by clouds. Also in the 19th century, American poet Emily Dickinson's moon similarly shone "Her perfect Face Upon the World below".

Duffy's more recent poem contains these familiar elements, being written in the persona of a woman in the moon – one who is incredulous anyone could have believed instead in a man in the moon. The woman in the moon has spent millennia observing Earth and now implores those gazing up at her to reflect on the neglect humans have wrought on planet Earth, repeating the question "What have you done?"

Of course, not all female literary responses to the moon have been quite so lyrical. Aphra Behn's hilarious farce The Emperor of the Moon, which took the London stage by storm, is one example. Behn was one of the first English women to earn a sustained living through writing, breaking social barriers and becoming a valued literary role model for later generations of women authors.

Based on a French source, but changed in many ways to make it Behn's own, the play centres on a doctor, Baliardo, who is tricked into believing he is in the company of men from the moon.

He longs to know whether the moon has seas, why it shines so brightly, and whether there is proof to the theory that its atmosphere was so like the Earth's that it, too, was inhabited.

The obsession makes him so gullible that when his daughter's mischievous lover pretends to be the "Emperor Iredonzor", and spouts clever sounding jargon in order to complete the disguise that he is an inhabitant of the moon descended to Earth, the doctor is convinced.

The fake emperor of the moon is then able to convince his future father-in-law that he is conferring a great honour on the family through a conjugal union with his daughter (who is in on the scheme). As the play finishes, the doctor realises that he has conceded to marry his daughter not to a superior creature from another planet, but to the fairly ordinary boy next door.

The farcical plot was spectacular and breathtaking in production and special effects. The original stage directions describe how:

The Globe of the Moon appears, first, like a new Moon; as it moves forward it increases, till it comes to the Full. When it is descended, it opens, and shows the Emperor and the Prince. They come forth with all their Train, the Flutes playing a Symphony before him, which prepares the Song.

We can only imagine the audience's reaction, but the play was an enormous success, staged 130 times by 1749. If Behn had thoughts of space travel, too, she did not commit them to paper.

But perhaps as NASA ramps up preparations for further lunar exploration, the moon will move out of the purely imaginary. Maybe women will at last be among the exclusive number of humans to have stepped on to the moon and gazed back to Earth for themselves.