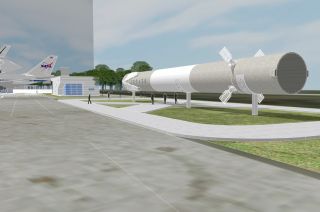 Space Center Houston will display a twice-flown SpaceX Falcon 9 rocket stage beginning in the summer of 2019. The stage was the first to fly on two International Space Station cargo supply missions for NASA in 2017.
(Image: © Space Center Houston via collectSPACE.com)

The first SpaceX rocket to launch on two NASA missions will soon land on exhibit in Houston.

Space Center Houston, the visitor center for NASA's Johnson Space Center and a Smithsonian affiliate museum, has announced it will display the twice-flown Falcon 9 first stage beginning this summer.

"We're excited to welcome Falcon 9 to our growing center," said William Harris, president and CEO of Space Center Houston. "We are deeply grateful to SpaceX for their contribution."

Harris revealed the news on Thursday (May 8), during Space Center Houston's Galaxy Gala at The Ballroom at Bayou Place in downtown Houston. The evening event served as a fundraiser for the non-profit science and space exploration learning center, which is run by the Manned Space Flight Education Foundation.

The 15-story-tall rocket stage will be displayed outside, on its side and raised off the ground so guests can walk underneath the booster. The exhibit will be located adjacent to Independence Plaza, Space Center Houston's display of NASA's 747 Shuttle Carrier Aircraft topped by a mock shuttle orbiter.

"One of the things we've been wanting to do here is interpret the history of the space program, but also interpret for the public what is currently going on and where we are going moving on into the future," Harris told collectSPACE.com in an interview. "With the relationship that NASA has with the commercial sector in support of the International Space Station and other missions, I felt we really needed to begin interpreting that as well."

"And one thing we are really emphasizing is showcasing innovation," said Harris. "What SpaceX has achieved with the reusable and landing rocket segments is really an achievement. It has had a big impact on the space industry in terms of costs and efficiencies."

SpaceX developed the Falcon 9's first stage to be recovered and reused in an effort to bring down the cost of accessing space. After launching its upper stage and payload, the first stage separates and re-ignites up to three of its nine Merlin engines to fly back to a vertical touchdown. The stage deploys four legs before landing on either a concrete pad located near its launch site or on an ocean-based autonomous droneship.

The Falcon 9 first stage donated to Space Center Houston first launched on June 3, 2017, on SpaceX's 11th NASA-contracted resupply mission to the International Space Station. It was the historic 100th launch from Complex 39A at the Kennedy Space Center in Florida and marked the first reuse of a Dragon cargo spacecraft.

The first stage successfully returned to a touchdown on SpaceX's Landing Zone-1 (LZ-1) at the Cape Canaveral Air Force Station.

Six months later on Dec. 15, 2017, the now "flight-proven" first stage lifted again, this time with the station-bound CRS-13 Dragon capsule. The booster landed at LZ-1 for its second and last time.

Renderings of Space Center Houston's exhibit includes a walkway stylized in a shape of the "X" in SpaceX's logo. The rocket is configured with its landing legs stowed up against the booster's body and its maneuvering grid fins deployed.

"Our plans in the long term is to display it in the vertical," Harris told collectSPACE. "But that takes a lot of engineering work because space artifacts are not designed for museum exhibits. So a lot of work needs to be done to stabilize it for long-term exhibition."

"We were given the option of exhibiting sooner and for the near term, placing it on horizontal display and then by some point, probably by next year, we will have it vertical," he said. "We will have to work closely with SpaceX on the installation."

SpaceX previously erected its first recovered Falcon 9 first stage on vertical display outside its headquarters and assembly facility in Hawthorne, California in August 2016. Elon Musk, SpaceX's CEO, also gifted the company's first "flight-proven" booster to be launched and recovered for a second time to "the Cape." To date the stage has yet to go display.