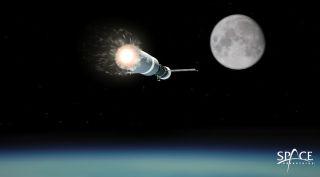 WASHINGTON — Space tourism company Space Adventures has reached a settlement in a lawsuit brought nearly two years ago by a man who signed up for the company's proposed mission around the moon but later sought a refund of his deposit.

The suit, filed by Harald McPike, was formally dismissed by the U.S. District Court for the Eastern District of Virginia April 18, according to court filings. That dismissal came after the two sides reached a settlement in a March 28 meeting with a judge.

The filings do not state the terms of the settlement. A spokesperson for Space Adventures confirmed April 26 that the company had settled the suit, but declined further comment. The law firm of Clare Locke LLP, which represented McPike in the suit, did not respond to a request for comment.

Related: Space Adventures and Russia to Fly 2 Tourists in 2021

McPike, an Austrian businessman and adventurer who lives in the Bahamas, filed the original suit in May 2017, seeking the return of a $7 million deposit he paid to Space Adventures for a $150 million seat on a Soyuz mission that would go around the moon, and additional damages. The defendants in the suit included Space Adventures; Tom Shelley, the company's president; and Eric Anderson, the company's chairman and chief executive.

According to McPike's suit, he contacted Space Adventures in July 2012 about the possibility of flying on a mission around the moon that the company had been promoting for several years. In March 2013, he signed an agreement committing to participate in such a mission, and paid an initial deposit of $7 million towards the $150 million total price with the expectation that the mission would take place within six years.

McPike was scheduled to make a second deposit of $8 million one year after contract signing, but he postponed that because of concerns he had regarding the limited progress on developing the mission, including lack of information from the Russian companies and agencies that would carry out it. Space Adventures terminated the agreement in March 2015 after McPike failed to make that payment and retained his $7 million deposit.

According to his suit, McPike later contacted the Russian space agency Roscosmos directly, and was informed that, contrary to the contract he signed, there was no formal relationship between the agency and Space Adventures for a circumlunar mission, that that the proposed mission was only in the "preliminary planning phase" along with several other future projects.

McPike filed suit on several counts, including breach of contract, fraud, and breach of contractual warranty under state law in Virginia, where Space Adventures is based. Some counts in the original suit, including unjust enrichment, were dismissed by the court in late 2017.

The case was tied up in court for months with pre-trial motions about admissibility of evidence. In one example, the defendants moved to exclude testimony from an expert witness for McPike who claimed that a circumlunar mission like the one Space Adventures had proposed could not be carried out before 2030.

McPike's lawyers, meanwhile, sought to exclude evidence about his personal and business life. "The only conceivable purpose of presenting such evidence and argument to the jury," they wrote in one motion, "would be to exploit the jury's lack of expertise in complex international tax and labor laws and play on the jury's emotions by vilifying Plaintiff as an unsympathetic tax-evading, model-chasing, foreign billionaire."

In a March 14 order, Judge T.S. Ellis III denied motions for summary judgments by both the plaintiff and defendant, saying that the question of whether there was a breach of warranty in the agreement would need to be settled by a jury.

The judge, though, appeared to be sympathetic to McPike's argument that there had been a breach of warranty because of a lack of a formal agreement between Space Adventures, abbreviated as "SA" in the document, and Roscosmos for a circumlunar mission. "Plaintiff is correct that, standing alone, the written agreements and memoranda of understanding between SA and Roscosmos do not demonstrate that SA owned the right to provide the circumlunar mission as warranted," he wrote.

However, he said pre-trial depositions by Anderson and Shelley suggested that the company could have the right to such a mission "though a series of written and oral agreements" and that it should be left to a jury to determine if that evidence was sufficient. "Although it is a close call, plaintiff's motion for a summary judgment must be denied," he concluded.

At the time of that order, the case was headed towards a jury trial scheduled to begin April 9. Judge Ellis, though, urged both sides, who had "felled forests (and not incidentally spent a small fortune)" in the legal proceedings, to settle. "This matter cries out for a sensible commercial resolution based on a well-reasoned assessment of the strengths and weaknesses of each side's case," he wrote. Two weeks later, the two sides reached a settlement.

Space Adventures continues to offer a trip around the moon on its website, but has not disclosed when such a mission would take place, or if it has any customers currently. McPike's suit claims he was told that Anousheh Ansari, who flew to the International Space Station as a customer of Space Adventures in 2006, had also signed up for the circumlunar mission, but neither the company nor Ansari has publicly stated she was a customer.

Early in the decade, prior to McPike's agreement, the company had claimed it sold one seat on the flight. "Because we've sold the first seat, and the second seat is very close to being sold, we plan to have it launch before the 50th anniversary of the start of the Apollo program," Anderson said in a February 2012 video.

He defined the start of the Apollo program as the originally scheduled launch date of Apollo 1 of February 1967. That mission, though, ended in tragedy when a fire consumed the spacecraft during a January 1967 pad test, killing the three astronauts on board. "I can think of no better way for the private spaceflight industry to honor the fallen ones on Apollo 1 than by reigniting that spirit of exploration and circumnavigating the moon, purely as a private project," he said in that 2012 video.

Other ventures that have proposed sending humans around the moon, or to the lunar surface, have also struggled. In 2004, Constellation Services International proposed circumlunar missions using Soyuz spacecraft, but failed to make progress before disbanding. Golden Spike Company announced plans in 2012 for commercial human landings on the moon, for both national space agencies and tourists, but the company faded away after a few years without making substantial technical or financial progress.

In February 2017, SpaceX announced it would send two people around the moon in late 2018 on a Crew Dragon spacecraft launched on a Falcon Heavy. Elon Musk, the chief executive of SpaceX, said the company had two customers signed up, but declined to identify them.

Less than a year later, though, SpaceX backed away from those plans, saying around the time of the inaugural launch of the Falcon Heavy that the company had no plans to human-rate the launch vehicle. Musk said the company was focusing instead on its next-generation launch vehicle, then known as Big Falcon Rocket.

Last September, SpaceX announced it would fly Japanese billionaire Yusaku Maezawa around the moon using that vehicle, now called Starship. Maezawa, who made an unspecified but "non-trivial" down payment for the flight, plans to take six to eight artists with him as part of a project called "#dearMoon." That flight is scheduled for 2023, pending progress on the development of Starship and its Super Heavy booster stage.