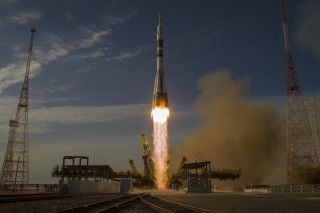 Russia's space agency Roscosmos has inked a deal with the U.S. space tourism company Space Adventures to fly two passengers to the International Space Station in 2021. And unlike past space tourists, these two passengers will fly together.

Roscosmos officials said Tuesday (Feb. 19) that their agency signed a contract with Space Adventures to fly a pair of tourists (dubbed "spaceflight participants") on a single Soyuz spacecraft for a short-duration trip to space station. A veteran cosmonaut would presumably fill the third seat in the three-person Soyuz, though Roscosmos officials did not make that clear.

The mission will be the first tourist flight to the station in 12 years, following the 2009 flight of Cirque du Soleil founder Guy Laliberte. Laliberte's flight, which cost a reported $35 million, was brokered by Space Adventures.

Space Adventures has helped fly a series of super-wealthy tourists to the International Space Station over the last 18 years. All of the flights have had price tags in the tens of millions of dollars. The company also arranges weightless airplane flights, launch tours and other space experiences.

The first space tourist flight launched American millionaire Dennis Tito to the station for a week in 2001 for a reported $20 million. South African entrepreneur Mark Shuttleworth launched next in 2002, spending 8 days in orbit for about the same price.

In 2005, American entrepreneur Greg Olsen visited the station on a nine-day flight for $20 million. Entrepreneur Anousheh Ansari became the first female space tourist to visit the station in 2006. She spent 12 days in space for an undisclosed price.

In 2007, Microsoft co-founder Charles Simonyi joined to space tourist club for the first time. He reportedly paid $25 million for a 13-day trip. Simonyi enjoyed the flight so much, he did it a second time. Simonyi returned to the International Space Station in 2009, this time paying a reported $35 million for the flight. He even bought the Soyuz capsule from that mission and donated it to a museum.

Computer game developer Richard Garriott visited the space station in 2008 in between the Simonyi flights. Garriott, the son of NASA astronaut Owen Garriott, became the first American second-generation astronaut to fly in space. He reportedly paid $30 million for his 12-day flight.

That brings us to Laliberte, who spent 11 days in space on his flight.

Roscosmos did not detail the identities of who might fly on the 2021 Soyuz flight or how much it would cost per seat. Space Adventures has also not shared any details on the flight.

"Over the last 18 years, our partnership has provided the opportunity for non-professionals to experience life in space. Our clients have spent in total close to three months in space and traveled over 36 million miles," Space Adventures CEO Eric Anderson said in a statement. “We look forward to continuing to work with Roscosmos in the pursuit of opening the space frontier to all.”

Editor's note: This story was updated at 7:28 p.m. EST to include comments from Space Adventures.