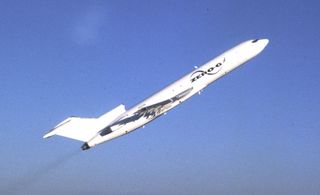 Theacquisition cements Space Adventures'control of Zero-G, in which it had been a substantial investor "for years,"according to Eric Anderson, president and chief executive officer of SpaceAdventures. Anderson's Vienna, Va.-based firm arranges trips aboard RussianSoyuz vehicles to the international space station.

Zero-Gprovides passengers with abrief training session followed by a 90-minute flight during which G-Force Oneperforms a series of parabolas that enable passengers to experience Martiangravity, lunar gravity and zero gravity. Zero-G has carried more than 5,000customers on more than 175 flights since 2004. The company won a research andtraining contract from NASA in January worth as much as $25 million.